130,000 minutes of delay affected thousands of passengers in Europe yesterday 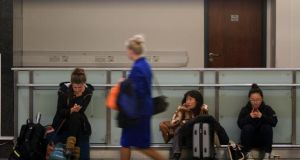 However passengers may face some knock on delays from yesterday’s glitch and are advised to check with their airlines.

Eurocontrol estimated that there were 130,000 minutes of delay yesterday with some 1,300 flights (almost 8 per cent of European traffic) being severely delayed.

In a tweet Dublin Airport said the flight schedule is operating as normal today.

Hundreds of Irish passengers were affected yesterday as dozens of flights were delayed during the day and at least 15 were cancelled to and from Dublin, Cork and Shannon airports.

Air traffic management company NATS said the technical problems in England had been resolved at about 7.30pm last evening, via its Twitter feed.

“Our apologies again to everyone who was affected by today’s outage.”

The issue caused major delays at several airports in the UK where hundreds of flights were cancelled, including London’s Gatwick, Stansted, Luton and London City, as well as Glasgow, Edinburgh, Cardiff, Dundee, Southampton and Liverpool. There were 217 flights cancelled at Heathrow alone.

Flights between Ireland and England and continental Europe were affected.

Nats said it was a “major challenge” for its engineers. It is a “very complex and sophisticated system with more than a million lines of software,” the company said. “This is not simply internal telephones, it is the system that controllers use to speak to other ATC agencies both in the UK and Europe and is the biggest system of its kind in Europe,” it added.

Eurocontrol said the incident “highlights once again the importance of the robustness of the technical systems supporting air traffic management and the need for contingency planning at network level to minimise the impact of any failures on the travelling public.”

Ryanair said over 100 flights to and from the south of England were affected.

It also called on the UK’s Civil Aviation Authority to intervene and “prevent further chaos for thousands of passengers.”

“While we acknowledge problems can occur, where is the contingency? It’s simply not good enough and the CAA needs to act now,” it said.

Ryanair said the “equipment failure” within UK air traffic control which will cause “significant flight delays and possible cancellations”.

Nats’ night-time operating system, which combines sectors of airspace for when it is less busy, did not properly switch over to the daytime system, causing a communication problem with the centre’s internal telephones.

They stressed that safety was not at risk at any time. Heathrow was the worst affected, with 228 cancellations — 112 in arrivals, and 116 departures, with most being short-haul flights.