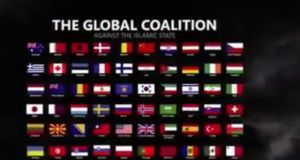 The authenticity of the video – which models itself on a Hollywood film trailer – cannot be vouched for, but it bears a strong resemblance to others issued by the group over recent months.