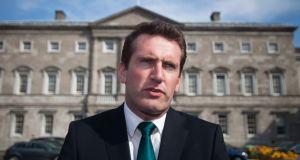 Drug users will be able to use supervised injecting rooms in Dublin next year, followed shortly afterwards by Cork, Galway and Limerick, according to the Minister in charge of the National Drugs Strategy.

Aodhán Ó Ríordáin, who is set to announce the radical move in a speech to the London School of Economics on Monday, told The Irish Times that medically supervised injection rooms “will happen next year”.

In his address he will also outline plans to decriminalise the possession of small amounts of drugs, including heroin, cocaine and cannabis, for personal use, as part of a “radical cultural shift” in the approach to drug addiction.

“I am firmly of the view that there needs to be a cultural shift in how we regard substance misuse if we are to break this cycle and make a serious attempt to tackle drug and alcohol addiction,” said Mr Ó Ríordáin.

He added that compassion had to be brought to the issue, and that as far as possible drug addiction should be removed from the criminal justice system.

The Minister’s address comes in the wake of leaked report from the United Nations Office on Drugs and Crime indicating it will call for the decriminalisation of consumption of drugs on public health and human rights grounds. Mr Ó Ríordáin says the heads of a new Misuse of Drugs Bill are being drawn up which will “unblock” the legislative obstacles to opening injection rooms.

The Minister hoped the new Bill would be enacted “early next year”. Regulations will follow, which will mean the State’s first injecting room open in the capital.

He has had approaches from drug treatment professionals in other towns and cities. On opening injecting rooms, the Minister said: “every city is different, every drug-using population is different, so different locations will have different needs.”

He said that following an appraisal of the Dublin facility, more will open as needed.

Outlining his thoughts on injecting rooms, Mr Ó Ríordáin will tell Monday’s conference, hosted by the school’s International Drug Policy Project, that he does not see injecting rooms as “free-for-all” facilities for drug addicts.

“These are clinically controlled environments which aim to engage hard-to-reach populations” of drug users, including homeless drug users who would otherwise take drugs in the open, creating risks to themselves and the public.

“Research has shown that the use of supervised injecting centres is associated with self-reported reductions in injecting risk behaviours.”

Mr Ó Ríordáin said he wanted to remove the “stigma” from drug addiction and the key to this will be preventing, as much as possible, those caught up in addiction ending up with criminal convictions. He added that the “shame” that dominates the discourse around drug use “disrupts the capacity of families and individuals” to seek help.

Though a matter for the next administration, he told The Irish Times there was now a “strong consensus that drugs across the board should be decriminalised”, but that this would be a matter “for the next government”.

Stressing a distinction between legalisation and decriminalisation, he said it would remain a crime to sell, distribute or profit from illicit drugs. But it would not be a crime to be a drug user or addict.

“This will be a wider discussion under the next government but once people get their head around the argument, about what decriminalisation actually means, that policy won’t be about the drug but about the individual. Then regardless of the drug the individual needs an intervention and society will be saying, ‘the substance is illegal, but you are not a criminal for taking it’.”

He concluded: “Above all the mode must be person-centred and involve an integrated approach to treatment and rehabilitation based on a continuum of care with clearly defined referral pathways.”