Identities of Dungarvan crash victims as yet unknown

Three people have died and a number of others were seriously injured after a car went on fire following a two-car collision in Co Waterford. Video: Patrick Browne 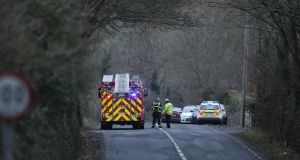 Gardaí at the scene of the crash on the N72 outside Dungarvan, Co Waterford. Photograph: Patrick Browne

Gardaí say it will be several days before they are in a position to confirm the identities of three young men killed in a two-car collision near Dungarvan, Co Waterford, on Sunday morning when one of the vehicles burst into flames.

The three men died when the Volkswagen Golf in which they were travelling collided with a Citroen Picasso people carrier on a stretch of the N72, known as the Military Road, north of Dungarvan at about 10am on Sunday.

Gardaí and the emergency services responded quickly to the crash and firefighters from Waterford County Fire Service managed to bring the fire in the Volkswagen under control. But it took some time before it was safe to recover all three men from the vehicle.

It is understood identification of the three deceased may involve the use of DNA samples and/or dental records and this accounts for it possibly taking several days before the three are formally identified. It is believed two of the deceased may be from the Dungarvan and Cappoquin areas while there were also reports early on Monday that the third person may be from Cork city.

The occupants of the people carrier, Mary Bermingham (37), her partner Gary Fenton (35), and her four children, ranging in age from six to 14, were all seriously injured in the collision. Both Ms Bermingham and Mr Fenton and her nine-year-old daughter were airlifted to Cork University Hospital (CUH).

A second child was also brought to CUH for treatment and all four underwent emergency surgery. Their condition is described as critical, but stable.

The other two children were taken by ambulance to University Hospital Waterford. It is understood one of them has been discharged from the hospital.

A Garda forensic crash investigator spent much of on Monday examining the scene of the collision on the N72, which was closed between the junctions with the N25 at Kilgobnet and the R672 at Gurteen until 6pm.

Meanwhile, gardaí in Fermoy have begun an investigation into the circumstances of a fatal collision between two vehicles on the N72 at Grange, between Fermoy and Ballyhooly, at 8am on Monday in which a 21-year-old man lost his life.

The man, who has been named locally as Kieran Colgan from Kilworth, was on his way to work in Mallow when the car he was driving collided with a 4X4 driven by a 40-year-old woman from Castletownroche who was bringing her three-year-old son to Fermoy.

Mr Colgan was treated by paramedics before being pronounced dead at the scene while the woman and boy were taken by ambulance to Cork University Hospital where they were treated for non-life threatening injuries.