Storm killed 11 in Ireland, including family of four whose car was crushed by a falling tree 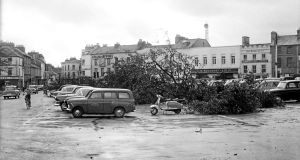 The aftermath of Hurricane Debbie in Eyre Square, Galway, in 1961. Photograph: Connacht Tribune

Hurricane Debbie hit Ireland on the morning of Saturday September 16th, 1961, and caused the deaths of 11 people.

It had already caused a plane crash and the deaths of 60 people off the Cape Verde Islands when it began moving in Ireland’s direction.

According to Met Éireann, winds gusting over 110 miles per hour or 177km/h were recorded as the centre passed close to the southwest coast. And a gust of 113 miles per hour, almost 182km/h, was recorded at Malin Head, the joint highest gust ever recorded in Ireland, and the same as one recorded at Foynes, Co Limerick on January 18th, 1945, before the instrument pen went off the chart.

Damage to property was extensive over the western half of the country.

Debbie was unusual in developing into a hurricane so far east in the Atlantic, Met Éireann said.

Afterwards, it moved on to cause severe gales over Scotland, and the remains of the storm could be traced as far east as Russia towards the end of the month.

On Monday September 18th, 1961, The Irish Times reported the storm had killed 15 people on the island of Ireland.

Deaths occurred due to falling walls, trees and debris as well as drowning. Four members of one family, driving in Cavan, died when an ash tree fell across their car and the roof was “crushed to seat level”.

A man was killed while sitting on a bench outside a Dublin hospital when a branch fell on him; another man died in Navan when a wall collapsed on him and a man in Fermanagh died when part of a roof blew off and hit him on the neck.

Many other people were treated for injuries caused by falling trees and slates, and one hospital in Northern Ireland treated 48 people.

Meteorologists have also drawn comparisons between Ophelia and Storm Darwin, which hit Ireland in February 2014.

During that storm, the Kinsale gas platform off the Cork coast was hit by a 25m-high wave, Shannon Airport recorded a maximum gust of 160km/h (99 mph), and more than 215,000 homes lost power. There was also extensive coastal flooding and damage to buildings. Up to 7.5 million trees were blown down – between 5,000 and 7,000 hectares of forestry.