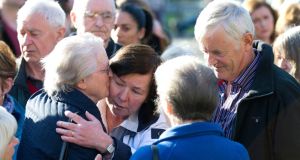 Marian and John Buckley (centre and right), the parents of Karen Buckley, join hundreds of mourners at a vigil for their daughter in George Square, Glasgow. Photograph: Jane Barlow/PA Wire. 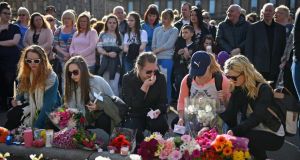 Flowers are left as members of the public gather in George Square during a silent vigil for murder victim Karen Buckley. Photograph: Jeff J Mitchell/Getty Images 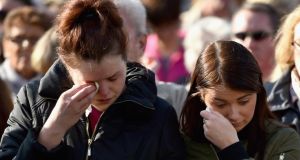 Members of the public wipe they eyes as they gather in George Square in Glasgow during a silent vigil for Karen Buckley. Photograph: Jeff J Mitchell/Getty Images. 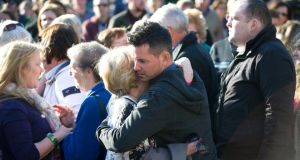 Kieran Buckley (centre), a brother of Karen Buckley, is comforted as he joins hundreds of mourners at a vigil for his sister in George Square, Glasgow. Photograph: Jane Barlow/PA Wire. 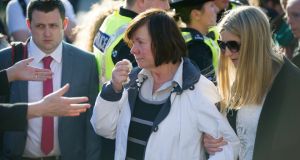 Marian Buckley (centre), the mother of Karen Buckley, is comforted as she joins hundreds of mourners at a vigil for her daughter in George Square, Glasgow. Photograph: Jane Barlow/PA Wire.

Hundreds of people gathered to pay tribute to Karen Buckley at George Square in Glasgow on Friday evening.

Crowds travelled to the city centre to pay their respects to the Co Cork student nurse, whose body was found on a farm outside the city on Wednesday.

Ms Buckley’s parents, Marian and John, hugged as they read messages of support and sorrow left for the family.

Many people brought flowers, lit candles and sang songs at the vigil before a minute’s silence was held.

The 24-year-old’s classmates from Glasgow Caledonian University and the university’s GAA team were among the crowds that gathered.

A piper played as people laid flowers and paid their respects to Ms Buckley.

Retired Cork Institute of Technology lecturer Barry Ahern and his family came down from Ayr for the vigil. After singing the Cork anthem, The Banks of My Own Lovely Lee, he explained; “We just feel a connection with the Buckley family, being from Cork - our hearts go out to them.”

Mr Ahearn said he has been living in Scotland for four years and wanted “to come today to show solidarity and support for Karen’s family.

The amount of people who attended the vigil for #KarenBuckley today in Glasgow is pretty moving 💐 #PeopleMakeGlasgow pic.twitter.com/jkRMBuaO6f

From the vigil for Karen Buckley in George Square. pic.twitter.com/Oc4YPYcmCe

Pic from the air shows the hundreds of Glaswegians who are turning out to pay tribute to student #KarenBuckley pic.twitter.com/avqs47zbeb

“The whole situation is so sad, particularly when you’re living in Scotland and something like this happens to someone from your own country. It just doesn’t fit, it’s so sad.”

His wife Maura said: “It has really touched us this week, it’s so sad and we all feel it very much. There’s a great number of people here tonight who I’m sure feel the same and we just want to rally round the Buckley family.”

Derry-born Glaswegian Pauline Bradley was so moved that she composed a song for Karen.

“There is sorrow over the waters for one of Ireland’s daughters and from Glasgow to Cork, we all share your pain,” she sang, the simple lyric resonating with the crowd.

Speaking during a visit to Cork on Friday, Tánaiste Joan Burton expressed her condolences to Karen’s family and friends.

“Anybody with children will understand that this poor family are going through every parent’s worst nightmare.”

Ms Buckley went missing in the early hours of Sunday morning during a night out with friends at Sanctuary nightclub in Glasgow.

Ms Buckley had moved to Glasgow in January to study occupational therapy.

Police confirmed this week that a body found at High Craigton Farm on Wednesday was that of the missing Cork woman.

In a statement Ms Buckley’s father, John, said the family are “absolutely devastated” at the loss of their daughter.

“Karen was our only daughter, cherished by our family and loved by her friends. She was an outgoing girl, who travelled the world where she met lots of people and thoroughly enjoyed her life. We will miss her terribly.”