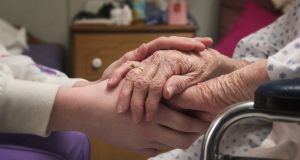 Same-day Covid-19 testing and restriction on visitor times and numbers could allow the State’s nursing homes to reopen safely to visitors, the representative group, Nursing Homes Ireland, has said.

The nursing homes regulator, the Health Information and Quality Authority (Hiqa), has urged health officials to begin talks to reopen nursing homes to visitors after one home warned that elderly residents could “die of loneliness” rather than coronavirus.

Nursing homes have been closed to visitors since March. Tadhg Daly, chief executive of Nursing Homes Ireland, which represents privately owned homes accounting for 80 per cent of the State’s 577 nursing homes, said same-day Covid-19 test results would be required before homes could reopen to visitors.

Strict visitor times and numbers, the wearing of personal protective clothing and nominated visitors for residents initially are among the proposals being considered.

“We didn’t move as a sector to restrict visitors lightly and equally we shouldn’t move lightly to lift restrictions,” he said.

The State’s chief medical officer, Dr Tony Holohan, said on Monday that the mass testing of nursing homes completed last week had shown the rate of transmission of the virus in homes had slowed.

Health officials are now looking at “the nature of the testing programme that we need to keep in place to continue to give us assurance that we are protecting that particular sector”, he said.

Elderly care and congregated residential settings for older people have been the worst-hit by the pandemic with people aged 75 and over accounting for 78 per cent of all deaths. The latest figures on Monday put the number of nursing home fatalities at 798, or 54.4 per cent of all 1,467 deaths.

The number of Covid-19 cases among nursing home residents rose by 50 in a day to 4,519, or one in every five confirmed cases.

Susan Cliffe, Hiqa’s deputy chief inspector, told The Irish Times that Hiqa had asked the Department of Health and the Covid-19 emergency team to consider a plan to reopen homes, even in limited circumstances, because of concerns around the welfare of elderly residents.

Mr Daly said he was “surprised” at Ms Cliffe’s comments that Perspex and “prison-type visiting scenarios” could be considered, since such equipment could cause distress for residents with dementia, he added.

Some private nursing homes have raised concerns about reopening before there is testing of nursing home residents who go back to those homes after spending time in general hospitals for treatment.

Dr Colm Henry, the HSE’s chief clinical officer, said on Sunday there was “no routine testing” for people not showing Covid-19 symptoms or suspected of Covid-19 returning from hospitals to nursing homes.

Older people in nursing homes were more vulnerable, he said. Two-thirds of nursing home residents have shown “atypical” Covid-19 symptoms beyond a fever, a cough or shortness of breath. “We now know more about the transmission that we didn’t know before,” he said.

1 Coronavirus: Non-essential travel from US set to be banned within days
2 Covid-19 incidence in the Republic set to surpass that of UK
3 ‘Our hearts are broken’ – implications of fresh lockdown sink in
4 Man whose remains lay undiscovered for 10 years to get family burial
5 German nudist chases wild boar that stole laptop at Berlin lake
Real news has value SUBSCRIBE