Government will last ‘a year to 18 months’, says Eamon Gilmore 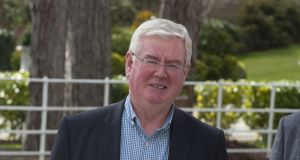 The Government will last a year to 18 months and will break up over “some very small thing”, former tánaiste Eamon Gilmore has said.

Speaking at NUI Galway (NUIG) yesterday, where he received an honorary doctorate, Mr Gilmore expressed fears about the impact of a British exit from the EU on the Northern Ireland peace process.

Mr Gilmore, now EU special envoy to the Colombian peace process, said he believed there were some very “good and positive” aspects to the new Government, such as the fact that the budget would be prepared in a “more open way” by parliamentary committee.

“I think the Taoiseach’s agreement with [Fianna Fáil leader] Micheál Martin will hold on that,” he said, in reference to the deal on budgets.

However, he said he believed a break-up would occur over “some very small thing which will get a lot of publicity and media attention, and a media storm will then build up”.

He believed it was already “not working” in relation to legislative reform, with not a single new piece of legislation yet put through.

Mr Gilmore said Labour “made the right decision” in selecting Brendan Howlin as leader, and it augured well for the party.He said former minister for the environment Alan Kelly, who was denied a run at the party leadership, had a “very bright future”.