Driving wind and rain didnt' deter hundreds of people from turning up to a flag-raising ceremony at Dublin Castle which begins the State commemorative programme for the centenary of the Easter Rising. Video: Ronan McGreevy 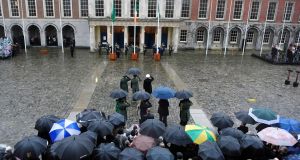 Rain pours down during a flag-raising ceremony to mark the opening of the State Commemorative Programme for 2016 in Dublin Castle. Photograph: Aidan Crawley/The Irish Times

Prince Charles may be invited to an Easter Rising commemorative event, the Minister for Arts, Heritage and the Gaeltacht Heather Humphreys has said.
“I know that Prince Charles has indicated that he would like to come back to Ireland because he thoroughly enjoyed his visit to Galway and Sligo [in 2015]. As the year goes on, there might be events he would like to attend and we have a very comprehensive Somme commemoration next year too,” she said.
However, no member of the Royal Family is due attend the main events on Easter weekend, the highlight of which will be the parade on O’Connell Street on Easter Sunday, March 27th.
“The way I see it is that the Easter Sunday and the events of Easter weekend are about the Irish people and about Ireland and I don’t want anything that takes away from that,” said Ms Humphreys.
She also confirmed that an invitation to the 1916 Rising commemorations will be extended to members of the unionist community.
No representatives from foreign governments other than ambassadors will be invited to the main events.
On Friday, hundreds of people turned out despite driving wind and rain for a flag-raising ceremony at Dublin Castle which begins the State commemorative programme for the centenary of the Rising.
President Michael D Higgins, Taoiseach Enda Kenny, members of the Cabinet, Northern Ireland’s Deputy First Minister Martin McGuinness and European Commissioner Phil Hogan were among those who attended the event in what used to be the headquarters of British rulers in Ireland.
Three flags were raised. The Tricolour and the flag of the Irish Republic both flew over the GPO during Easter Week 1916. Nearby, the Irish Citizen Army flag, with its emblems of the plough and the stars, flew from the Imperial Hotel.
The names of all 78 volunteers who died as a result of Easter Week, including the 16 executed men, were read out, starting with James Francis Adams and ending with Peter Wilson.
Mr Kenny described the Easter Rising as a revolt of “poets and patriots from every walk of Ireland and social strata with a shared sense of national identity that changed forever the course of Irish history”.
“We respect the dignity that is their due, we cherish the principles and the ideals contained in our Proclamation, for which they fought so clearly.”
Defence Forces head chaplain Fr Seamus Madigan said those who had fought for Irish freedom in 1916 had “pushed back the horizons of our hope”.
It was important to give thanks for the freedom Irish people enjoy today, he said, and to hope for a peaceful world.
Music was provided by RTÉ’s Cór na nÓg, who sang Danny Boy and There is Peace, finishing with the song Sunrise.
On Friday evening a Peace Proms musical event, hosted by Ms Humphreys, was held in the Convention Centre Dublin.