Government happy for Cameron to take time over EU referendum

Better to get the deal right than rush it, says Minister for European Affairs Dara Murphy 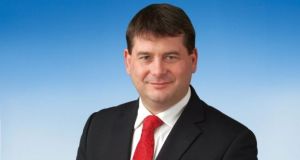 The Irish government are happy for British prime minister David Cameron to take time to secure a deal with the European Union to put to the British people in a referendum, according to the Minister for European Affairs, Dara Murphy (above).

The Irish government are happy for British prime minister David Cameron to take time to secure a deal with the European Union to put to the British people in a referendum, according to the Minister for European Affairs, Dara Murphy.

Mr Murphy said the issue of when Britain holds a referendum on EU membership was a matter for Mr Cameron and his government and if he felt he needed more time to finalise a deal with the EU, then the Irish government would not have a problem with that.

Speaking at the World Economic Forum in Davos on Thursday, Mr Cameron said he was in no rush to secure a deal. “I’m not in a hurry. I can hold my referendum at any time before the end of 2017. It is much more important to get this right, rather than rush it,” he said.

It is believed that his comments were likely to unnerve negotiators in Brussels who are pushing for a deal at next month’s EU summit as the EU battles with a range of other crises including the refugee crisis and threats to the Schengen free travel area.

“Our sense is that it is not unnerving people. We feel that negotiations have been going well over the last number of weeks, particularly since what we think was a strong performance by prime minister Cameron at the last European council in December.

“I think contrary to being unnerved, there is a good sense of progress being made and I get that sense from other members states that I have engaged with and definitely from our own position here in Ireland,” he said.

Mr Murphy said that it was in the interest of every European Union state including both the UK and Ireland that the best possible deal be obtained by Mr Cameron so that he can call on the British people to vote to stay in the EU.

“We believe there is strong potential out of discussions that Mr Cameron should be able to go to his people and strongly endorse a Yes vote - and of course the timing of that is a matter for him and for his government.”

“I think he is absolutely genuine in his ambition to negotiate a deal that improves the European Union from a United Kingdom perspective,” said Mr Murphy, adding that he believed there was potential to agree protocols that would satisfy the United Kingdom.

“My sense is that he does want to campaign for the UK to stay in on the back of an agreement with all other 27 member states and if he feels he needs a little bit more time, then that’s entirely a matter for him and for his government.”

Mr Murphy said that Ireland is still working on timelines provided by the UK and it was his expectation that the substantive issue about what Britain wants changed would still be discussed at next month’s European Council meeting.

“We expect that the Commission will issue its initial report around February 5th and it will be discussed at the European Council in February and then the timelines of a referendum will impacted by when the deal is done,” he said.