Give Me a Crash Course In . . . asylum reform 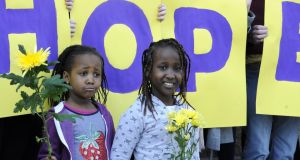 So a report this week calls for big changes in the asylum system Yes, the Working Group on the Protection Process, which Minister for Justice Frances Fitzgerald appointed last October, published its 257-page report – 388 pages including appendices – on Tuesday. Its task was to look at making the system more humane and cost effective.

How many people are in the system? As of February 16th, 7,937 people were waiting for final decisions about their applications for asylum, subsidiary protection or humanitarian leave to remain. Fifty-five per cent of them have been in the system for more than five years.

But they’re here, being put up, with all meals, at taxpayers’ expense. How bad can it be? Most live in one of the 34 direct-provision centres around the State, many isolated from local communities, with poor transport links. Whole families share bedrooms, with no private living space, and single adults share with other adults without private space. Most have no cooking facilities, so they cannot do that most basic thing: plan their own meals or provide food for their children. Adults are not allowed to work or to access training or education. Boredom and deskilling, not to mention isolation and depression, are huge issues. Children are entitled to go to school but are effectively barred from progressing to third level: they would have to pay huge fees, as they are from outside the EU. The long-term impact on family life, child welfare and parenting skills has been described as detrimental by the Irish Association of Social Workers.

That does sound pretty bleak. What does the report recommend? First, it says that no one should be in the system for more than five years and that anyone in it for longer – about 3,350 people – should now be fast-tracked to residency. It also calls for the enactment of the International Protection Bill, which would streamline the decision-making process, as soon as possible. This would mean that people would get a decision on their asylum applications within 12 months. The report estimates that about 40 per cent of applicants will be granted the right to remain here. It also calls for steps to improve quality of life while people are waiting, such as the right to work after nine months and for young people who have been here for more than five years to be allowed to go to third level in the same way that an EU citizen can. It recommends that weekly allowances be increased from €19.10 to €38.74 for adults and from €9.60 to €29.80 for children, that families be accommodated with private space other than their bedroom, and that single people be allowed to apply for their own room.

That all sounds positive. When will this happen? “Will this all happen?” is perhaps more pertinent. The International Protection Bill will be enacted by the end of the year, but other improvements have yet to be approved. The working group has costed the measures at €135.4 million in total – and it adds that up to €195 million could be saved were the legal process made faster and people moved out of direct provision. But the working group has not counted increases in the costs of social welfare, housing and education as people move into the community. And although Aodhán Ó Ríordáin, the Minister of State with special responsibility for equality and new communities, said that the report must be implemented in full, Minister for Justice Frances Fitzgerald said only that it provided food for thought.