Gerry Adams waxed: ‘Remind me never to do this again’ 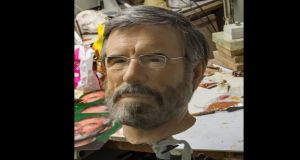 There’s a headless body at the bottom of PJ Hegarty’s garden in Leixlip. The head that should be attached to the body is to be found nearby, impaled on a metal rod sticking out of the centre of a wheel, lying flat on the floor of an ivy-clad breeze-block shed.

It is Gerry Adams, though not quite as we have come to know him.

In fact, headless bodies are not what anyone expects to find in the otherwise quiet and unremarkable housing estate that is PJ’s home. But all is not what it seems. . .

Lisa Jameson, the museum’s operations manager, hopes to have the completed wax representation of Adams on public display within weeks. All that remains is for the man himself to supply suitable clothes to dress the mannequin that represents his body, a pair of shoes and spectacles.

“You can’t have a naked Gerry Adams,” says PJ before being reminded of the infamous Adams tweet about bouncing naked on a trampoline with his pet.

“Oh yes! The dog. Is that a real story?” PJ wonders aloud.

The wax Adams project has been months in the marking.

In early September, after the Sinn Féin leader had agreed to help the museum in its quest to have a copy of him made for its Time Vault display (“the history of Ireland from the Vikings to the peace process,” says Jameson), and allow The Irish Times record the process in photographs and on video, Adams took part in the first part of what has been an unusual journey, to say the least.

He went to the museum in Foster Place where a photographer took numerous shots of his head – front, back, top, both sides – from a variety of angles and with the subject somewhat expressionless. The resultant images show every hair on Adams’s head, every blemish on his skin.

Next, Adams was sat on a chair and was wrapped in cling film, neck to feet, rather in the manner of an ancient Egyptian about to be mummified, or a Buddha statue wrapped for shipping overseas.

His clothes suitably protected, a viscous, gray gunge was spread all over Adams’s face, only his nostrils being left clear to facilitate breathing. On top of the gunge, the Sinn Féin leader’s face was then wrapped in surgeons’ plaster gauze to create, when set and dry, a hard bowl shell which the gunge itself sets. 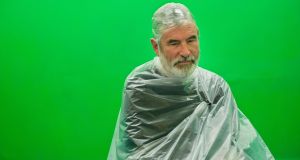 “Remind me never to do this again,” said Adams as PJ and a helper lurried on the gunge.

It was alginate, the sculptor explained in an interview this week, a silicone, rubbery substance derived from seaweed, “the same stuff used by dentists”, he said, and which would not stick like superglue to Adams’s beard.

“I had to use a new material, a silicone material that slips off the hair. It’s very good but it was very expensive,” said PJ. “Boy, was I worried that it would stick but it worked a treat. You have to be a bit of a chancer in this game.”

A couple of hours later, the Sinn Féin leader was off back to politics, leaving in his wake a perfect mask, a mould of his face, retained by PJ. The mould was in effect an imprint of Adams and into it plaster of Paris was later poured to create, when set, a three-dimensional, near- perfect copy of the Sinn Féin leader’s face.

This became the model for PJ to fashion a bust of Adams using traditional potter’s clay, correcting the distorting effects the silicone mould and gravity had on his subject’s skin. He was also armed with a set of detailed measurements he made during a subsequent visit to the Sinn Féin leader’s office in Leinster House.

He measured Adams’s head – chin to hairline, nose to tragus (the small piece of the ear closest to the cheek and projecting backwards over the concha, the earhole), the width of the ears themselves and the distance from the forehead to the back of the head.

“He’s quite a big man, so his head was quite big. His cranium was bigger than normal,” the sculptor recalled.

Adams’s eyes also struck him as unusual. “They’re dark brown with a sort of orange background. I read somewhere that darker brown eyes are a sign of intelligence.”

And Adams’s hands also surprised. “For a man of his size, his hands seemed artistic or academic. I was expecting labourer’s hands.”

The clay bust became the base for the final mould – another plaster of Paris mould, this time of the entire head, made in two sections, front and rear. Removed when set from the clay bust and bound back together again with wire, the resultant hollow mould is the receptacle into which molten wax is poured.

That was October and since then PJ has worked, by his own estimation, 40 to 60 hours a week in his garden end studio and workshop, finishing what will soon go on display.

“Sculpting a head is the hardest thing you can do because it’s down to millimetres and it’s down to good visual information,” he says. “It takes so long because, basically, you are putting in hair, one piece at a time, and with a beard, basically you’ve got two heads of hair, plus the eyebrows.”

On his two sittings with Adams – making the original silicone face mould and then taking head measurements – the sculptor found his subject pleasant company.

“I found him quite jovial and calm and friendly and co-operative. That’s how I found him. And he turned up for the sitting, so fair play to him.”

The headless mannequin at the end of the garden (in a very un-Gerry Adams double- breasted dark blue business suit) leans against a cupboard in PJ’s workshop, awaiting the arrival of its subject- approved attire. The room is crammed with clutter: the workbench and shelves are littered with tools, and jars of screws, nails, nuts and bolts; drills and saws; tangled lumps of wire; hessian mesh for plaster moulds; and bags of clay.

A second room, PJ’s inner sanctum, has more of the air of the artist’s studio about it. “It’s my cell,” he says.

There’s a low-lying work table and several anglepoise lamps. There are numerous former jam jars now bristling with paint brushes, and tubes of oil paint, scrunched up and squeezed from use, their contents smeared on surfaces.

And from low down, impaled on the bar sticking out of the wheel, the head of Gerry Adams – brilliantly executed, the likeness exact and unmistakable, every hair seeming correct in position and colour, the waxen skin toned into life with a delicately applied blush of oil paint, those dark brown eyes looking out (little sign of an orange tinge to the pupils, however).

“I did give him a slight smile,” says PJ, “because, although he’s a serious man, I found him relaxed and friendly. He is a peacemaker. That’s how I see him.”

The Sinn Féin leader selected the pose he wished his doppelgänger to adopt in the National Wax Museum. The legs will be a little apart, the left a shade forward of the right, the body leaning back slightly.

The arms will be folded, not tightly and high across the chest, more in a relaxed V across the lower abdomen. And, between them, PJ will place a copy of the Belfast Agreement, the one whose front page was signed by all parties to it, including Adams.