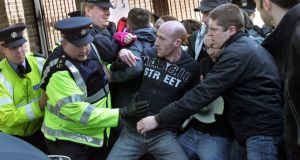 Gas is expected to flow from the Corrib field off the Mayo coast in the coming days, after final approval for the project was issued by Minister for Energy Alex White.

Mr White announced on Tuesday that he had issued Shell E&P Ireland with consent to operate the Corrib natural gas pipeline, linking the subsea gas facilities 83km offshore to the onshore refinery at Ballinaboy.

In a brief statement, Shell said it had received the “final go-ahead” for the pipeline’s operation from Mr White.

“The operations and start-up team at the Ballinaboy bridge gas terminal will now begin their final preparations for the introduction of gas from the offshore field,” it said.

A company spokesman said gas would flow “in the next day or so”.

Rossport resident Mary Corduff, whose husband was among five men jailed in 2005 over opposition to plans for a high pressure pipeline running close to homes, said Mr White’s decision came as “no surprise”.

“I had thought he might give us our Christmas, but the Minister has made his final decision, and let’s hope he will be able to answer for it,” she said. “All we can hope for is that we were wrong about our safety concerns.”

The €3.4 billion project has run more than three times over budget, and involved two changes to the planned onshore pipeline route as a result of community opposition.

An Bord Pleanála rejected a second routing option, away from homes in Rossport, finding up to half of it to be “unacceptable” on safety grounds.

The final section of pipeline runs through the longest tunnel of its type in Europe under Sruwaddacon estuary, a special area of conservation - linking the landfall for the offshore pipeline at Glengad to the refinery at Ballinaboy.

The approval comes almost 20 years after the gas discovery was declared by Enterprise Energy Ireland, which was subsequently bought up by Royal Dutch Shell.

The project tore a community apart, and became synonymous with State mismanagement, after planning approval was initially rejected for an onshore gas refinery at Ballinaboy.

In April 2003, Bord Pleanála inspector Kevin Moore warned that the isolated rural area of north Mayo was the “wrong site”, but a revised planning application for the onshore refinery by Shell received approval the following year.

Five men were jailed in 2005 for their opposition to the linking onshore pipeline on environmental and safety grounds, residents and An Taisce pursued legal actions and a campaign spearheaded by Shell to Sea resulted in clashes with gardai and many arrests.

Some €20 million was spent on Garda handling of protests, while it became the largest single issue for the Garda Ombudsman - with 127 complaints. Garda Ombudsman recommendations on seven prosecutions and disciplining of a senior officer were not pursued.

Human rights organisations including Frontline, Afri and Table called for inquiries in relation to alleged breaches of protestors’ rights, while the UN special rapporteur on human rights defenders reported a “pattern of intimidation and harassment”at the Corrib gas site in a report issued over two years ago.

Earlier this month, four residents initiated a legal challenged to an emissions licence for the refinery awarded by the Environmental Protection Agency.

The project, which is subject to corporation tax, is not expected to yield any revenues to the State for some time, due to the cost overrun. Shell and partners were required to pay €8 million into a community gain fund administered by Mayo County Council.

Current Shell E&P Ireland managing director Ronan Deasy told RTÉ Primetime in October that it could be “within five” or “within 10” years before tax was paid, depending on a number of factors.

Mr White said in his statement that the natural gas field would meet “on average” 42 per cent of the all-island gas demand over its first two years of operation.

This would “add to gross domestic product by substituting for imported gas”, he said.

“The recent Government White Paper on Energy, which I published on December 16th, has set out a trajectory to a low-carbon economy by 2050,” Mr White said.

“However, this transition will take time, and fossil fuels will remain part of our energy mix for some years to come, as we first eliminate the most polluting fossil fuels such as coal.

“In this context, the development of indigenous gas resources will deliver significant and sustained benefits, particularly in terms of enhanced security of supply, import substitution, national and local economic development, and fiscal return.”

1 Brightest comet of the century visible in Irish skies for the next week
2 Reopening of pubs that do not serve food may be delayed beyond July 20th
3 Johnny Depp: Ex-wife or friend defecated in bed in ‘fitting end’ to marriage, court hears
4 US tours to Ireland: ‘No one wants to travel at this point’
5 Delicious details of Mary Trump’s book open up world of president’s family
Real news has value SUBSCRIBE