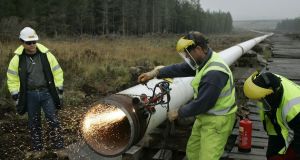 The dismantling of a section of the Corrib Gas Line, at Aughoose, Co Mayo, in 2005. Photograph: Dara Mac Dónaill/The Irish Times

The Garda Síochána Ombudsman Commission has initiated an investigation into allegations that a former contractor supplied alcohol on behalf of Shell E&P Ireland to Belmullet Garda station in Co Mayo at the height of the Corrib gas project dispute.

“Following consideration of that material, GSOC is now investigating the matter,” it said yesterday.

It is understood that the material was forwarded to the ombudsman by Garda Supt Thomas Murphy of Swinford station, who was tasked with a second Garda examination of the allegations by contractor OSSL.

Shell E&P Ireland Limited (SEPIL) said it welcomed the GSOC investigation into OSSL’s allegations. It said the allegations had dragged on for a long period and SEPIL trusts that GSOC’s involvement will bring this matter to an end.*

OSSL, which was employed by Shell from 2005 to 2010 to provide services to the Corrib gas project, has also said it is “delighted” with the development.

Its managing director Des Kane claimed the company is owed €43,000 for the delivery of €29,500 worth of alcohol to Belmullet Garda station in December 2007.

The ombudsman’s options included opening an investigation into formal complaints made by those directly affected or initiating a public interest inquiry, as it did in April 2011 when gardaí were recorded making jokes about threatening to deport and rape one of two women involved in a Corrib gas protest.

The alleged delivery was undertaken six months after one of the most fractious protests in the Corrib gas dispute, at Pollathomas pier, which resulted in a number of injuries, a Garda Ombudsman investigation and a recommendation that a senior garda be disciplined for his handling of the situation.

OSSL claims it had previously delivered smaller quantities of alcohol to the station in December 2005 and December 2006. Shell “unequivocally rejects” the allegations, for which it says there is no evidence.