Gardaí ‘tipped off’ IRA ahead of RUC officer murders 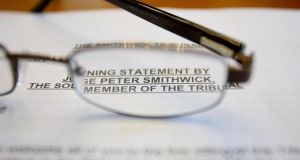 It was likely that the IRA was tipped off by somebody inside Dundalk Garda station to assist in the 1989 murders of two RUC officers, the Smithwick Tribunal has found. Photograph:Julien Behal/PA Wire.

The IRA was tipped off by at least one person inside Dundalk Garda station ahead of the 1989 murders of two senior RUC officers in Co Armagh, the Smithwick Tribunal has found.

However, the tribunal has said there is not enough weight of evidence to make a determination that key tribunal witnesses, former sgt Leo Colton or former det sgt Owen Corrigan, colluded in the murder of the RUC men.

The tribunal report, which was published tonight, ruled out the possibility of a third key witness, Finbarr Hickey, having colluded in the murders.

Chief supt Harry Breen and supt Bob Buchanan were the highest ranking RUC officers to be killed during the 30 years of the ‘troubles’.

They were were shot dead in an ambush on the Edenappa Road in south Armagh, on March 20th, 1989, minutes after leaving a meeting in Dundalk Garda station.

The RUC officers had been meeting Garda supt John Nolan to discuss details of a cross-Border, joint crackdown on smuggling activities, believed to have been controlled by the IRA.

The report of the seven-year inquiry into allegations members of the gardaí colluded with the IRA in the killings was published shortly before 6pm.

In his 1,652 page report tribunal chairman, Judge Peter Smithwick found electronic signals detected in the area on the morning of the killings, indicated considerable activity in the area. He said the first phase the activity began at about 11.30am.

He said “circumstances alone point towards a conclusion that information was leaked in order to trigger the commencement of the operation at this time”.

Crucially, Judge Smithwick also found the IRA “required positive identification that Harry Breen in particular, had arrived at Dundalk Garda Station”. He said there was likely to have been two leaks of information from the Garda station on the day.

Judge Smithwick said it is possible these leaks were done by different members of the force.

He said: “Given that I am satisfied that the evidence points to the the fact that there was someone within the Garda Station assisting the IRA, it also seems to me likely that the Provisional IRA would seek to exploit that resource, by having that individual or individuals confirm the arrival of the two officers”.

In relation to the three former members of Dundalk gardai who were granted legal representation at the tribunal Judge Smithwick said he was “satisfied” Mr Hickey was “not on duty” and “in all probabliity not in the station” , and so “not in a position to pass information to the IRA which facilitated the ambush on the Edenappa Road”.

He said it was “not possible to say” when the inappropriate relationship between Mr Corrigan and the IRA first developed. He also said Mr Corrigan “had “consciously withheld evidence in relation to a personal bank account and, in these circumstances, my conclusion is not being made on the basis of all relevant considerations”.

In relation to Mr Colton, Judge Smithwick said he found “as a fact” that Mr Colton had “assisted the provisional IRA” by having his former colleague , then sergeant Hickey, sign false passport applications in 1995 / 1996.

He described this as “a relatively significant form of assistance” which suggested the IRA placed “considerable trust” in him. But he said the evidence before him did not establish when this relationship began. He said Mr Colton would have been in a position to facilitate the identification of Harry Breen, “but the evidence does not establish that he colluded with the Provisional IRA in the murders of the two officers.

Mr Buchanan was a regular visitor to Garda stations south of the Border and usually travelled in his own car, a standard Vauxhaul saloon. His membership of the RUC , and regular trips to the Republic which often took place on a Monday, would have made him a target for IRA gunmen.

However Mr Breen was an even more prized target for the IRA. Following the shooting dead of eight active service members of the IRA as they attempted to blow up a police station in Loughgall, Co Armagh in 1987, Mr Breen had appeared in newspapers pictured with guns at the Loughgall site.

In a statement after the ambush, in which the two men were shot, the IRA said Breen and Buchanan had driven their car into one of a number of regular IRA checkpoints operated throughout south Armagh.

However, rumours of a potential IRA ’mole’ among the Garda in Dundalk were rife although both the gardaí and the RUC immediately denied the rumours.

But the Tribunal report notes some members of the RUC and the Garda were deeply suspicious of some garda officers.

All men repeatedly denied passing information to the IRA.

Former Monaghan Inspector Tom Curran told the tribunal Mr Buchanan had said the RUC was worried about the relationship between Owen Corrigan and the IRA .

The report also notes Mr Curran said he had personally delivered this information to Assistant Garda Commissioner Eugene Crowley, at Mr Buchanan’s request. Mr Curran told the tribunal Mr Crowley had made no comment about the information but had put his head in his hands. They never spoke about it again, he said.

The report also covers intelligence material submitted by the Garda. During the hearings counsel for the tribunal Counsel for the Tribunal, Mary Laverty SC said that there were three separate “high grade” intelligence reports that”on the face of it” suggested collusion. However, no investigation into them occurred she said.

Judge Smithwick defined “collusion” as including acts of turning “a blind eye”, acts of “commission” and “omission”.

In the years flowing the killings Finbarr Hickey later served a jail sentence for signing blank application forms for passports which ended up in the hands of members of the IRA. Mr Hickey said he had done so at the behest of Mr Colton. Mr Colton has repeatedly denied this.

Mr Corrigan who acknowledged dealing in second hand cars and owning a number of properties while being a serving officer, said he became disillusioned with the force and eventually left.

But he maintained throughout that the allegations against him were “a monsterous lie”. He told the tribunal he was “the jewel in the Crown in the Garda’s fight against the IRA” and gave evidence over 15 days during the tribunal’s public sessions.