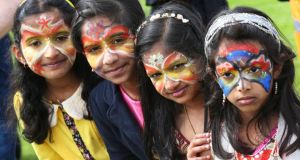 Children from the Indian community at the parade in Doughiska Park in Galway. Photograph: Joe O’Shaughnessy

From small villages to large cities, every community in Ireland is now as multicultural as it wants to be, according to leaders of an award-winning suburb in Galway.

The success of intercultural activity among some 33 nationalities living in the eastern suburb of Doughiska/Merlin Woods, Roscam and Ardaun was celebrated with a community parade and festival in the area on Saturday.

The suburb came first in the IBP Pride of Place Awards 2014 in the urban population of over 1,000 category, with judges paying tribute to “best practice in co-operation, collaboration, integration and social inclusion of the highest calibre”.

Galway is the most multicultural city in the State, according to the 2011 Census, with 19.4 per cent of its residents recorded as non-Irish.

This diversity was reflected in Saturday’s parade, with participants representing the Polish, South African, Zimbabwean, Kenyan, Nigerian, Ghanaian, Ahmadi Muslim and Roman Catholic communities, along with local schools, sports clubs, men’s shed and women’s sewing circles, the Brothers of Charity and the Garda.

GIRO (Galway International Retro Orchestra), a multinational group of musicians living in Galway, played early 20th-century traditional tunes from Ireland, Scandinavia and Eastern Europe, while there was also intercultural dance by Irish, Hungarian and South African performers, and a world food table, as part of an evening of events.

The Ardaun Doughiska Roscam (ARD) community centre, which hosted the celebration, noted that the area experienced a “population explosion” between 2000 and 2005, due to planning rezoning and consequent “Celtic Tiger housing developments”. In just five years, the population on Galway’s eastern border grew from about 200 to over 7,500.

“This community took action to redress the lack of amenities and, while work is ongoing, much has been achieved,” it says.

This was acknowledged in the Pride of Place first prize citation which noted that the community had shown a “remarkable capacity to cater for the needs of a diverse multicultural population, which totally lacked basic social, educational, health and recreational facilities and services”.

The judges noted that the umbrella community development company had recently acquired a modern, but closed-down, hotel premises and had transformed it into a multi-purpose community facility.

Friends of Merlin Woods has also held many community events to highlight the environmental value of some 150 acres of adjoining forested habitat – home to red squirrels, some 16 species of butterfly, five species of bat, the short-eared owl, the rare small white orchid and Burren-type limestone pavement and flora.

The group has been campaigning to protect the green lung, owned partly by the city council and partly by the Health Service Executive, although the woodland area has been earmarked for a bus corridor and other developments.

Climate change: 9 ways Ireland can get its act together 20:20
Investigation into €10,000 spent on fillet steaks, rib roasts, legs of lamb and luxury chocolates for prisoners 20:12
Leaving Cert: Up to 1000 extra college places may be needed due to results error, Harris says 20:08
Taoiseach tells TD to ‘cop on’ over criticism of contact tracers asking about pubs 19:37
Loyalists call for ‘hard political decisions’ to remove paramilitarism from society 19:36