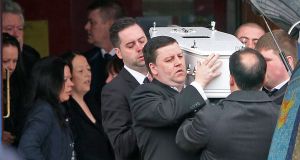 The remains of Tyler Joyce (3), who drowned with his father Seán Sweeney near Ashington Park in Dublin 7 last weekend, are taken from the Church of The Annunciation, Finglas, on Friday morning after his funeral Mass. Photograph: Colin Keegan/Collins Dublin 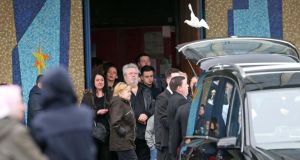 Doves are released as relatives console each other at the funeral of Tyler Joyce (3), at the Church of The Annunciation, Finglas, on Friday morning. Photograph: Colin Keegan/Collins Dublin

The small white coffin of Tyler Joyce entered the Church of the Annunciation in Finglas west to silence and exited to the sound of the Pharrell Williams song Happy.

The three-year-old was tragically drowned along with his father Seán Sweeney (36) near the Royal Canal on Easter Saturday.

Happy reminded the grieving congregation of a boy who expressed that emotion so often and would shake and dance around a room when the song came on.

He was a child who could not sit still for a moment, an irrepressible little boy who had his Minions bag on his shoulder at 6.30am every morning ready for going to the crèche.

He loved football, but the football had to be replaced by a balloon in case he broke everything in the house.

Fr Cahill said it was usual to pray for the dead, but Tyler was so young that it was he who was praying for them. It had only been a short time since he had last been at the altar to be baptised in his little white suit.

The shocking tragedy reminded us of how we should appreciate those we love all the more, he said. Tyler’s death, like the death of every young person, was “against every law of nature”, Fr Cahill added.

“It would be quite legitimate to say, ‘Where was God when we needed him?’ Words are empty this morning. Tyler has not gone away. He will never go away. We are celebrating his life. We are celebrating the love with which he is carried in his family.”

Tyler and his father were attempting to cross the Royal Canal at the ninth lock near Mr Sweeney’s family home in Ashington Park when he fell in some time on Easter Saturday.

Their bodies were found on Easter Sunday morning. Mr Sweeney’s funeral took place at Our Lady Help of Christians Church on the Navan Road on Thursday.