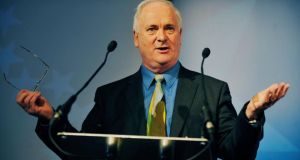 John Bruton: “Sinn Féin and the IRA should have used the Home Rule Act as a peaceful stepping stone to dominion status and full independence.”

The Easter Rising and subsequent War of Independence were “completely unnecessary” because Home Rule was already on the statute books, former taoiseach John Bruton has said.

Mr Bruton has called on the Government to commemorate the centenary of the passage into law of the Home Rule Bill on September 18th, 1914. It was intended the law be brought into force at the end of the first World War, which broke out, from a British and Irish point of view, 100 years ago today. In his detailed submission to the Government, Mr Burton said the violence of that period “should not be retrospectively justified in the other commemorations that are to be undertaken over the next 10 years”.

“Sinn Féin and the IRA should have used the Home Rule Act as a peaceful stepping stone to dominion status and full independence in the same way as the Treaty of 1921 was so used, but only after so much blood had been shed,” he wrote.