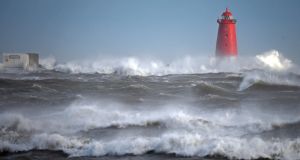 Heavy rain and the threat of flooding can be expected for the next three weeks, Met Éireann has warned. (Pictured above) A combination of high seas and high winds, make for a dramatic scene, at the Poolbeg lighthouse, Ringsend. Photograph: Eric Luke/The Irish Times.

Heavy rain and the threat of flooding can be expected for the next three weeks, Met Éireann has warned.

The unsettled conditions will not change for the next week and a half at the earliest with more spells of heavy rain and wind expected, Met Éireann’s head of forecasting Gerald Fleming has said.

He predicted that this month will be among the wettest and warmest Decembers on record and the same weather pattern will persist into the New Year.

Torrential rain fell in the south and south-east during Tuesday and Wednesday.

Carrick-on-Suir in Co Tipperary registered 81.1mms (more than three inches) of rain in a 24 hour period during Storm Frank.

The weather station in Millstreet, Co Cork recorded rainfall of 76.9mm in the same time period. Other parts of Cork, Kerry, Galway and Mayo recorded 50mm or more of rainfall.

Mr Fleming said the risk of further flooding had been aggravated by very heavy falls of rain with many places recording 25mm (an inch) or more rain in four of the five days since Christmas Day.

New Year’s Eve and New Year’s Day will be relatively calm, but the weekend will be wet and windy again.

“There is no sign of an end to this spell of windy, very unsettled and very wet weather that will last well into the middle of next week and beyond,” Mr Fleming stated.

Mr Fleming and other members of the National Coordination Group (NCG) gave a two hour briefing to the Minister for the Environment Alan Kelly and the Minister of State at the Office of Public Works (OPW) Simon Harris on Wednesday.

Both ministers were told that it may be several weeks before the problems associated with the current levels of flooding are alleviated.

Levels in the Shannon catchment area have risen again as a result of Storm Frank. In the Upper Shannon, water levels had risen by 12cm in the previous 48 hours and in Athlone by 6cm leaving the river Shannon 11cm above its previous peak on December 16th.

The smaller Shannon tributaries are also rising at potentially dangerous levels. The River Brosna in Westmeath and Offaly has risen by 26cm in the last 48 hours.

The rivers Bandon, Blackwater, Suir, Barrow and Nore have risen significantly too because of Storm Frank, according to Jim Casey of the Office of Public Works (OPW).

Mr Casey cautioned that even when the rain stops, the threat of flooding will remain for several days yet. “We are still in a severe flood situation on the Shannon catchment and all the other catchment areas just mentioned,” he warned. “Ongoing flood defence actions will have to continue for several days to come.”

The ESB has advised that levels on Lough Derg in the River Shannon may reach 2009 levels leading to an increase in the flow of water through Parteen Weir of up to 500 cubic metres per second, similar to levels seen during the 2009 floods.

This will lead to an increased threat of flooding downstream in parts of Limerick city which have already been affected by flooding.

ESB engineering manager Tom Browne said they had no choice but to increase the flow of water through Parteen Weir.

“If we didn’t do, the levels of Lough Derg would back up. You would get significant flooding upstream and you would also increase the risk of flooding downstream because you would be giving yourself a lot less room to manoeuvre if more heavy rain came,” he said.