A German tourist recounts the moment a gunman began firing on beachgoers in Tunisia in an attack that claimed the lives of 38 people in 2015. Video: Reuters 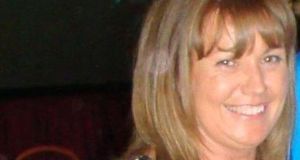 Lorna Carty, from Co Meath, who was killed in a terrorist attack at a resort in Tunisia. 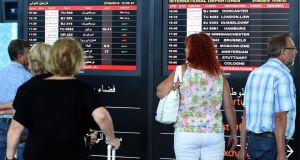 Tourists leave Tunisia at the Enfidha International airport on Saturday in the aftermath of a shooting attack in which 38 people were killed. Photograph: Getty 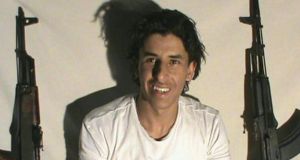 An undated image made available on Twitter by the Tunisian branch of the Islamic State (IS) group on Saturday, reportedly shows the alleged gunman. The IS group identified the man by the nom de guerre of Abu Yahya al-Qayrawani and Tunisian security forces idenfied him as Tunisian student Seifeddine Rezgui. Photograph: AFP 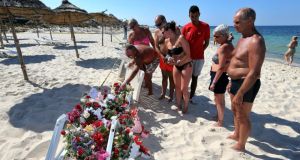 Tourists lay flowers in tribute to the people killed in a terror attack on a beach in front of the imperial Marhaba Hotel in al-Sousse. Photograph: EPA 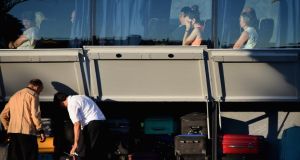 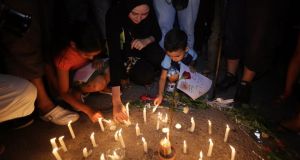 People gather for a candle light rally in solidarity with the victims of a deadly attack on the Imperial Marhabada hotel. Photograph: EPA 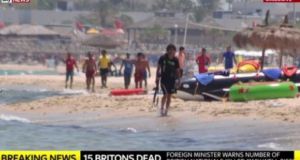 A screengrab from Sky News showing Seifeddine Rezgui on the beach ear the Imperial Marhabada hotel with a gun shortly before the attack in which 39 people were killed. Photograph: Sky News 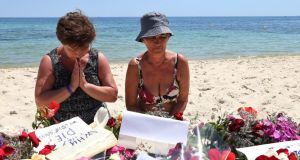 Tourists pray beside flowers placed in tribute to the people killed in a terror attack on a beach in front of the imperial Marhaba Hotel in Sousse,Tunisia, on Sunday. Photograph: EPA

Irish tourists intending to travel to Tunisia over the coming weeks should “exercise extreme caution”, the Minister for Foreign Affairs has said.

Charlie Flanagan issued the warning as he confirmed that three Irish citizens died in Friday’s terror attack. Mr Flanagan said he had been in contact with their families over recent days. President Michael D Higgins will also contact the victims’ families by letter, a spokesman said.

Laurence and Martina Hayes, a couple in their 50s from Athlone, Co Westmeath and Lorna Carty from Robinstown, Co Meath, were killed in the attack on Sousse.

The Minister said he did not believe any further Irish people were injured in the incident and he urged those planning to travel to the region to be “extremely vigilant and extreme caution”.

He told RTE’s This Week programme: “I would urge those there to continue to liaise with tour operators on the ground and with the consular assistance from Foreign Affairs.

“My travel advice for Tunisia is to exercise extreme caution. Anyone wishing to visit the region, anyone with holiday plans over the next few days or weeks I wish to acknowledge the Tunisian authorities have declared the incident to be over but nevertheless I would urge Irish citizens heading there and those in Tunisia to remain extremely vigilant, to follow instructions given to them by the police, the tour operators, the hotels.”

Mr Flanagan said he was not in the “business of imposing travel bans” but his advice for anyone travelling there was to exercise “extreme caution”.

Relatives of Laurence and Martina Hayes have been contacted by Irish officials, a Department of Foreign Affairs spokeswoman said. The department has set up an information line for those affected by the attack: 00353 1 408 2000.

Westmeath Gaelic Athletic Association (GAA) has tweeted a message of condolence to the family. “Sincere sympathy to the Hayes family Athlone who suffered their tragic losses in the terror shooting in Tunisia,” it said.

The Irish ambassador accredited to Tunisia, David Cooney, is working with Irish citizens still in the country.

Ms Carty, a nurse and mother of two adult children, had travelled to Tunisia with her husband Declan, a well-known dairy farmer.

Sincere sympathy to the Hayes family Athlone who suffered their tragic losses in the terror shooting in Tunisia.

The couple received the Tunisian holiday as a gift from a relative as Mr Carty was recovering from heart surgery.

Their daughter Hazel (18) had just completed her Leaving Cert and is believed to have been notified of her mother’s death while on holiday in Turkey.

Their son Simon (21), a science student at UCD, was at home in Robinstown. The authorities are gradually identifying those killed in the attack.

One of the British victims has been named as Adrian Evans, who worked for Sandwell Council in the West Midlands. Joel Richards, reported to be Mr Evans’s nephew, was also named as a victim.

It is understood Mr Richard’s was a student at the University of Worcester.

They said he was an “exceptionally-talented footballer” who represented both club and county “with conviction” on numerous occasions. Mr Richards’s 16-year-old brother Owen is reported to have survived the attack.

The attack has seen thousands of tourists rush to leave Tunisia. An Aer Lingus flight from Monastir arrived in Dublin last night and other Irish holidaymakers in the country are expected to cut short their holiday and return home. It is unclear how many Irish nationals were in Tunisia at the time of the attack.

Sunway managing director Tanya Airey has offered her “sincere condolences” to all Irish nationals affected by the attack. The Irish tour operator provides holidays to Tunisia.

The company flies weekly on Friday’s to Tunisia. She said a number of Irish Sunway holidaymakers had decided over the weekend to remain in Tunisia.

The tour operator is expected to make a call this week on whether to allow those booked to depart on Friday to travel to Tunisia.

In a tweet she noted that the department advises extreme caution but has not issued a “do not travel” notice.

Irish citizens returning on Friday night told RTÉ of the chaos during the attack, describing a large explosion and gunfire. Many praised the staff for the assistance they gave guests.

Six nationalities are among the 39 dead.

They are thought to have been killed by a 23-year-old Tunisian aviation student Seifeddine Rezgui who disguised himself as a tourist and began firing at holidaymakers on a beach using a Kalashnikov hidden in a beach umbrella. Islamic State has claimed responsibility for the attack.

Fifteen of the dead are from Britain.

Confirming the figure, British foreign minister Tobias Ellwood said the Sousse atrocity was “the most significant terrorist attack on British people” since July 7th, 2005, when 52 people were killed.

Speaking at the Foreign Office, Mr Ellwood said: “Sadly, I can confirm that at least 15 British nationals were killed in yesterday’s atrocity but I should stress that the number may well rise as several more have been seriously injured in this horrific attack.”