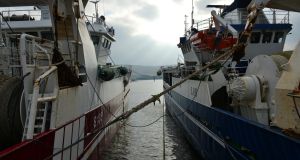 Castletownbere Fishermen’s Co-op general manager John Nolan said that the depiction of the Irish fishing industry published in the Guardian was not representative of the industry in Ireland. Photograph: Provision

Fishing industry figures in the country’s main whitefish port of Castletownbere have rejected a newspaper investigation which found that the Irish fishing industry is exploitative of foreign labour.

Castletownbere Fishermen’s Co-op general manager John Nolan said that the depiction of the Irish fishing industry published in the Guardian was not representative of the industry in Ireland.

Mr Nolan said that there were some 1,940 registered fishing boats in Ireland and he estimated that approximately 60 per cent of those working in the industry were Irish, while 40 per cent were foreign nationals.

The reason for the growth in the number of foreign fishermen was simply that many locals had emigrated, while others had given up fishing to work in the construction industry during the boom.

Castletownbere Fishermen’s Co-op has 56 whitefish, pelagic and prawn boats fishing out of Castletownbere, Kinsale and Schull as well as some Kerry ports, employing a total of 350 in crews.

The vast majority of the foreign national crews would be from other European Union countries, including many from eastern Europe as well as small numbers of Filipinos and Egyptians, he said.

“We would have no truck with trafficking people or with abusing people or anything like that and I can say that any foreign nationals working on our boats are treated the same as the Irish crew.

Mr Nolan explained that fishermen are classified as self-employed and the crew are paid a share of the proceeds of the catch sale after expenses are deducted and the boat’s owners take their share.

He acknowledged that there had been a case in Castletownbere some years ago where two foreign crew were housed in a caravan by a boat owner who delivered groceries to them once a week.

“You can’t be responsible for everyone but I would be certain that 95 per cent of boat owners treat their crew properly and I just don’t recognise the industry I know from the Guardian article.

“Fishing is a hard, tough job, let there be no mistake about it, but this article would lead you to think we’re involved in some sort of sweatshop industry and that is not the case from my experience.”

Mr Nolan said that about 70 per cent of the co-op produce is exported and already he had had foreign customers in contact after the publication of the Guardian article, wondering about working conditions for crew.

“This article has the potential to be very damaging to the Irish fishing industry but to my mind it does not represent the reality of the industry – it’s tough work but people are treated equally and fairly.”

Mr Duffy said that he accepted that African and Asian fishermen were coming into the Republic via Belfast on 48-hour transit visas, but that was separate from the issue of how they were treated.

“But that’s a different issue entirely to how they are treated - fishing is a tough job and they work hard, but to compare it to slavery is wrong and if it was that bad, they would not be coming back.

“You are talking about a minority of a minority who are engaged in the sort of practice described in The Guardian.”