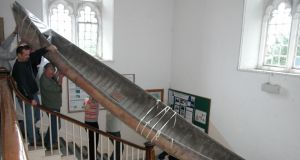 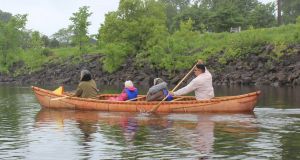 Replica Grandfather Akwiten canoe which the Maliseet community has offered to Galway as a mark of thanks for returning their original.

It can take four days to find a suitable tree for the type of birchbark canoe a native American community once built to transport moose and fish.

It might take longer to source one in the moose-free west of Ireland, but members of the Wolastoqiyik (Maliseet) St Mary’s First Nation are determined to do so, if funding can be raised.

The community of just 1,000 people who take their name from the Wolastoq or St John river in New Brunswick, Canada, plan to build a replica to present to Ireland as a mark of thanks for repatriating the world’s oldest surviving birchbark canoe of its type.

“We would like to bring our skills and our music as a type of cultural exchange,” their leader, Chief Candice Paul, said.

It has been over five years since President Michael D Higgins, then Labour’s Galway West TD, intervened to back an appeal by Chief Paul for the canoe to be sent home. He recognised its importance as a “spiritual and cultural artefact”.

A mid 19th century account describes how this river “horse” was made of bark, garnished with cedar, coated with fir-tree gum and willow twigs, and how it carried “wives, children, dogs, kettles, hatchets, matachias (trinkets), bows, arrows, quivers, skins and the coverings of their houses”.

So how did this particular craft come to be suspended from rafters on the other side of the Atlantic?

The Grandfather Akwiten canoe, as it is known, was one of three built by the Wolastoqiyik – nicknamed “Maliseet” or “slow speakers” – for British lieutenant-governor Sir Howard Douglas, who arrived in New Brunswick in 1824.

It passed into the hands of Lieut Stepney St George, an ancestor of former Fianna Fáil minister Martin Mansergh.

The lieutenant was then serving with the British imperial forces in Canada, and took the craft back home to Headford Castle, Co Galway.

Lieut Stepney St George was an enlightened landlord, and chair of the Headford Relief Commissioners during the Great Famine. He contracted fever and died, and in 1852 the canoe was donated by Edward Lombard Hunt to what was then known as Queen’s University in Galway.

It hung from the roof of the geology museum in the Quadrangle through decades of political turmoil and change, until it was rescued latterly by Dr Kathryn Moore of the university’s earth and ocean sciences department, and sent to Canada for restoration.

Members of the Wolastoqiyik spotted it on CBC News and contacted the Canadian Museum of Civilisation, where it was put on temporary display before return to Ireland. Irish academic Gerry McAlister of the Irish Studies Programme, St Thomas University, and Dr Susan O’Donnell, University of New Brunswick Fredericton supported Chief Paul’s campaign, which was a success.

“In a world ruled by ownership and personal interest, the Irish people have demonstrated their goodwill and respect for our people in the most meaningful and most honourable way possible,” community representatives said in a message relayed through Mr Higgins.

Such knowledge could help to “rebuild the cultural foundations of indigenous people worldwide”, it said, adding that it would focus in the months ahead on the need to establish a permanent home for the craft.

‘Not a nail’ used

The Wolastoqiyik also held a ceremony for it on the St John river, which was “very emotional”, according to Joe Kearney who compiled an RTÉ Radio 1 documentary which records some of their music.

“This canoe had been talked about for generations. They believed they had lost it forever, and it was like a lost child coming home,” he says.

The community, including Wayne Brooks and his sons, have begun building replicas to paddle on the river, and a delegation hopes to work with teenagers here on construction of one for the Corrib. “We would like to visit Galway and anywhere else in Ireland that would have us,” Chief Paul says.

An RTÉ Radio 1 documentary, The Grandfather Canoe, will be broadcast this evening as part of the Documentary on One series. rte.ie/radio1/doconone