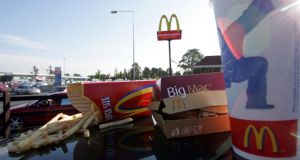 The McDonald’s plan in Greystones was eventually scuppered earlier this year when supermarket Lidl announced it would not sell the site to the restaurant chain. Photograph: Brenda Fitzsimons

A three-year battle to ban fast food outlets from the vicinity of school playgrounds by “no-fry zones” rules into county development plans comes to a head in Co Wicklow on Monday.

The plan to create a 400m no-fry zone around a three-school campus in Greystones is supported by the Irish Heart Foundation, the HSE and a number of doctors’ organisations. Members of the campaign group No Fry Zones 4 Kids hope the ban will lead to similar moves by other local authorities.

However, the ban is oposed by Wicklow county management and at least 12 councillors, who in July unsuccessfully argued against its inclusion in the Draft Wicklow County Development Plan 2016-2022.

Now with the Draft Development Plan nearing conclusion, the final vote on the no-fry zone is to take place in Wicklow on Monday afternoon.

The proposal is for a 400m exclusion zone for fast food outlets in the vicinity of three schools: Templecarrig Secondary School, Gaelscoil na gCloch Liath and Greystones Educate Together.

It arises from plans by McDonald’s to locate a “drive-thru” restaurant opposite the three-school campus.

Together the schools have a projected roll of 1,800 children.

Wicklow County Council initially granted planning permission for the McDonald’s in 2014. A revised plan for a larger McDonald’s was ultimately approved by Bord Pleanála in 2015.

Ministerfor Health Simon Harris was one of the original objectors to the scheme when it was first before Wicklow County Council.

In addition, Minister for Justice Frances Fitzgerald stated in 2014 that an exclusion zone for fast food restaurants around schools and playgrounds was under consideration as part of plans to tackle childhood obesity.

As part of the Wicklow Draft Development Plan process, submissions in favour of the ban were made by the Royal College of Physicians of Ireland’s Policy Group on Obesity, the HSE, DCU, TCD, UCG, the Irish Heart Foundation’s Nutrition Council, Safefood, and the Association for the Study of Obesity, among others.

Two submissions calling for greater consideration of the issues were from the Department of the Environment and former TD Billy Timmins.

Two submissions against the ban included one from an individual concerned about jobs, and Kentucky Fried Chicken, which said it offered a wide range of foods to be enjoyed as part of a balanced diet.

The McDonald’s plan was eventually scuppered earlier this year when supermarket Lidl announced it would not sell the site to the restaurant chain, as it was required for an extension to the supermarket.

However, the campaign group No Fry Zone 4 Kids, which opposed the McDonald’s application, has pressed ahead with its campaign for the no-fry zone to be written into the county development plan, because it says of the problem of obesity among children.

Wicklow County Council chief executive Bryan Doyle has recommended the wording of the ban be amended to remove the specified distance of 400m and to require “careful consideration” of fast food applications.

Philip Moyles of No Fry Zones 4 Kids said they were hoping they could rely on the councillors to carry the ban as it was approved in the draft development plan.