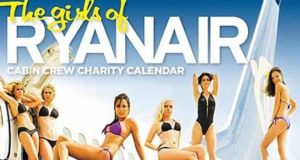 The Ryanair calendar’s dead and gone. Unlike O’Leary, it’s in the grave.

Times (business and otherwise) are definitely a changin’.

The airline’s chief executive, Michael O’Leary, was on Irish radio yesterday to spread the new Ryanair love. This new love is a more “family friendly” love. It is a hands-off love that does not involve inviting paying customers to ogle scantily clad staff for charity, he confirmed.

So, put your wallet away. The infamous calendar, which the company says raises “€100,000 for charity each year”, will not be available in 2015.

Anyone who bought a calendar from Mr O’Leary can thank the staff, he said yesterday.

“I think it was a great idea by the cabin crew. It genuinely did raise huge amounts of money for charity and we will struggle to replace it with something as good or as successful.”

In case you’ve mislaid your copy of the inaugural Ryanair calendar from 2007, it featured female cabin crew posing on aircraft and on the tarmac. One semi-naked crew member wore a life jacket and sucked suggestively on the inflation tube; another appeared scantily clad in the cockpit. Subsequent offerings used Crete and Cyprus as a backdrop. (Or, at least, destinations close to Crete and Cyprus.)

In December 2013, a judge in Malaga, Spain banned adverts for the Ryanair calendar ruling that the adverts were discriminatory.

The airline was ordered to end the campaigns and not repeat them in the future.

According to the authority: “We also considered that most readers would interpret these images, in conjunction with the text ‘RED HOT FARES & CREW!!!’ and the names of the women, as linking female cabin crew with sexually suggestive behaviour.

“Although we acknowledged that the women in the ads had consented to appear in the calendar, we considered that the ads were likely to cause widespread offence.”

So is the hard-nosed corporate world finally cottoning on to the fact that women use (and pay for) their services?

Are they inspired by touchy-feely liberation and gender equity, or are they merely bowing to consumer pressure and the fact that women are now often paying the piper and finally changing the tune?

A Ryanair survey conducted in 2011 found that 10.5 per cent of respondees thought the calendar should include men. Only six per cent said they wanted a men-only calendar, according to a spokesperson.

Women are less likely to buy a glossy compilation of almost-naked male cabin crew sucking on life-jackets, it seems.

Ryanair has said that it is still finalising its charity options for 2015, which will be unveiled soon.

Michael O’Leary is going to have to do a lot of sponsored walks to make up the deficit. Let’s just hope he keeps his kit on.