Expectant mother adamant she will not have a hospital birth 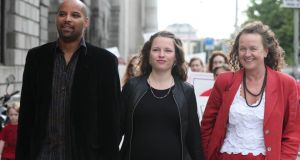 Aja Teehan has been left with three options when she gives birth to her second child in October, unless she appeals to the Supreme Court.

The first is to have the baby in hospital as she did with her first child, the second is to go ahead with a home birth but without a medical professional present and the third is to go to Britain or Northern Ireland to have a birth in a setting similar to a home.

“We are going to have to consider all options. None of them are palatable,” she said after High Court judge Ms Justice Iseult O’Malley ruled that the HSE did not need to consider her application for a home birth on its own merits.

“The whole point of having a home birth is that the familiarity of the surroundings engenders a feeling of safety in the mother and, because birthing is a physiological process, that actually directly results in a 200 per cent to 400 per cent increase in a successful, normal delivery,”she said.

Ms Teehan remains adamant that she is not going to have a hospital birth.

“I’m really not willing to risk myself or my baby in hospital,” she said.

She has become something a cause célèbre among home birth campaigners and dozens of mothers with babies in slings turned out for yesterday’s hearing, making for a colourful and frequently noisy scene in the corridors outside Court No 6.

Though Ms Teehan lost the case and is now liable for her own costs and possibly those of the HSE, she maintained it was a case worth taking as it highlighted the strictures put on home birth in Ireland and the rate of Caesarean section in Irish hospitals, running at 26.5 per cent, twice the average as recommended by the World Health Organisation.

“It was really important on a personal level for me to fight for what I know is best based on medical evidence,” she said.

She is considering an appeal to the Supreme Court, but the costs may rule out such a move.

The HSE did not comment after the hearing. In the UK, midwives are employed by the National Health Service to assist women who have home births.

One senior British midwife, who is familiar with the Irish situation, said community midwives are allowed to use their discretion in the case of women looking to have a vaginal birth after Caesarean section.

“We would advise the women of the risks involved, but, if she wanted to stay at home, we would honour that,” she said. “It is all about building a relationship. We would never get to the stage where our hands are tied behind our back because we are always working on the relationships.”

1 Luke ‘Ming’ Flanagan bares his bottom half to European Parliament
2 Trump turns to bible for photo op as DC burns around him
3 Coronavirus: Public urged to stick with ‘tough’ restrictions to allow phase two proceed next week
4 Covid-19: Easing of restrictions ‘unlikely’ to be speeded up
5 ‘Frustrated and angry’: Thousands march in Dublin to protest death of George Floyd
Real news has value SUBSCRIBE