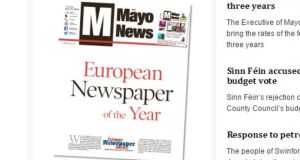 The Mayo News was founded in 1892 by nationalist PJ Doris, espousing an ethos of “independence and progressiveness, while serving the local community”. Photograph: www.mayonews.ie

The Westport-based newspaper, owned by the Berry family, has secured the award for the second time.

It was among 200 newspapers from 27 countries entered for the competition, now in its 16th year.

The Mayo News was founded in 1892 by nationalist PJ Doris, espousing an ethos of “independence and progressiveness, while serving the local community”.

Managing editor Neill O’Neill paid tribute to the newspaper staff, particularly the in-house design and production teams responsible for this year’s redesign of the publication.

The judges cited the newspaper’s commitment to redesign and noted that its “content and design are always up-to-date”.

The only other Irish newspaper to win an award this year was Galway City Tribune in the category of ‘visual storytelling’.

The overall winner in the “best regional” category was De Twentsche Curant Tubantia, the Netherlands.

The awards will be presented at the European Newspaper Congress in Vienna, Austria, next year.

1 How one couple’s weekend away resulted in 30 Covid-19 cases
2 Taoiseach tells TD to ‘cop on’ over criticism of contact tracers asking about pubs
3 Miriam Lord: Government’s latest comedy of errors offers little to laugh about
4 Coronavirus: 429 new cases as vigilance urged amid rises across the country
5 Trump urges Proud Boys to ‘stand down’ after debate criticism
Real news has value SUBSCRIBE