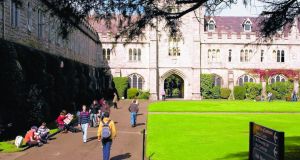 Dr Conor O’Mahony of the Faculty of Law at UCC told a seminar marking the anniversary of Louise O’Keeffe’s victory in the European Court of Human Rights that Irish law under-utilises the court. File photograph: Matt Kavanagh/The Irish Times

Louise O’Keeffe’s victory in the European Court of Human Rights (ECHR) has helped highlight the potential of the Strasbourg court to enrich the Irish legal system and Irish lawyers should make more use of ECHR judgments in domestic courts, a leading law lecturer has said.

Dr Conor O’Mahony of the Faculty of Law at UCC said that Ms O’Keeffe’s victory in the ECHR, which found that Ireland had failed to uphold her human rights by not protecting her from child sexual abuse in school, was a particularly significant judgment.

“The O’Keeffe case was a hugely significant judgment on the specific issue of child protection in the schools system, but it also has a broader significance in terms of the relationship between Irish law and the European Convention on Human Rights.

“The judgment itself and the reaction to it both illustrate the under-exploited potential of the ECHR in Irish law and litigation,” said Dr O’Mahony at a seminar organised by the Faculty of Law at UCC to mark the first anniversary of Ms O’Keeffe’s victory in Europe.

Ms O’Keeffe had taken an action in the High Court against the State for damages for what she had suffered at the hands of principal Leo Hickey at Dunderrow National School in Co Cork in the early 1970s. The High Court had ruled that the State was not liable.

The High Court ruled that Ms O’Keeffe should have brought her action against the school’s board of management, which employed Hickey. The Supreme Court upheld the ruling when Ms O’Keeffe unsuccessfully appealed the decision.

But Ms O’Keeffe and her legal team, solicitors Ernest Cantillon and Mary Scriven, were vindicated when the ECHR ruled in January 2014 that her human rights had been breached by the State’s failure to protect her from child sexual abuse while a primary school pupil.

Dr O’Mahony said Irish lawyers and judges are generally slow to engage seriously with the European Convention on Human Rights underpinning the ECHR and Ms O’Keeffe’s victory shows how the the court can vindicate human rights in a way domestic law sometimes cannot.

“The reaction to the judgment by Mr Justice Hardiman of the Supreme Court in his speech at a conference in DCU in September is indicative of a certain degree of antipathy of senior members of the judiciary towards the ECHR,” said Dr O’Mahony.

“The substance of his speech also shows a lack of empathy with the Convention and its case law, and this prevailing attitude feeds into an incredibly restrictive approach taken to the interpretation and application of the ECHR Act 2003 in Supreme Court cases.

Dr O’Mahony added that it remained for Irish lawyers to take up the challenge of crafting creative ECHR arguments in domestic courts.

Ms O’Keeffe also addressed the seminar and paid tribute to students from the Faculty of Law’s Child Law Clinic who had assisted Mr Cantillon and Ms Scriven in the preparation of her appeal to the ECHR.

Former ombudsman for children and current chief commissioner of the Irish Human Rights and Equality Commission Emily Logan said it was important that Ms O’Keeffe’s case was not treated as some historic event, as she had received reports of abuse by teachers occurring as recently as 2006.

“What is concerning is not only the question of abuse - but that as recently as eight years ago, despite new policy and legislative initiatives, that this very serious series of allegations made by children was not investigated properly by any of the relevant authorities,” Ms Logan said.

The Department of Education confirmed that it has lodged an updated action plan on child protection with the Council of Europe in response to the ECHR judgment in Ms O’Keeffe’s case.

“This updated action plan details the developments since the initial action plan was lodged last July. Specifically, it notes that the review initiated by the Government of current and planned legislative and administrative child protection measures in the education sector is continuing.

“The review, which is being undertaken by a specifically tasked sub-committee of the Children First Inter-Departmental Implementation Group is expected to submit a report to Government in the near future,” the Department of Education said in a statement.