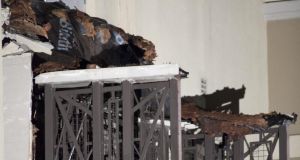 A view of the collapsed fourth-floor balcony in Berkeley, California: a Dublin architect, who asked not be named, said it was clear that the timber joists had failed and noted that balconies in Ireland would normally be constructed from concrete and/or steel. Photograph: Peter Dasilva/EPA

Structural engineers and architects believe the most probable cause of the Berkeley balcony tragedy was a failure of the timber joists on which it rested. Such a failure was most likely to have occurred because of prolonged exposure to moisture which in turn would have caused a weakening and, ultimately, a rotting of the timber fibre.

The balcony was thus in a precarious condition and unable to support the weight of, it is believed, about a dozen people, some or all of whom were moving at the time of the collapse. Such a dynamic load, as opposed to a static or immobile weight, would have increased the stress on a structure that experts agree was already degraded.

Architect and premises safety expert Ron Bertone, of Palm Beach, Florida, estimated the size of the balcony, based on the size of the French doors leading out to it, as about 4ft by up to 10ft – or about 40sq ft. This would compute at a load-bearing capacity of some 24,000lb (or 1,088kg).

This was not “a substantial balcony”, he acknowledged but, asked if it should have been capable of bearing the presumed load at the time of the collapse, he replied: “I would think so, yes.” 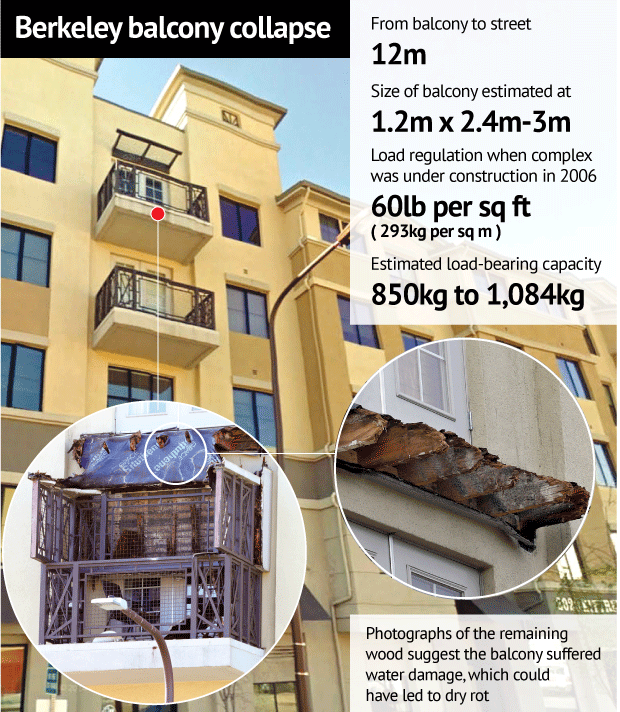 A Dublin architect, who asked not be named, said it was clear that the timber joists had failed and noted that balconies in Ireland would normally be constructed from concrete or steel, or from a combination of both. Noting the size of the Library Gardens building in Berkeley, he said: “For that scale of building, we would never use timber.”

An occupant of the building, identified only as Chan N, in February posted on the social media business website Yelp that a third-floor patio had been “closed to all residents for safety reasons” but did not detail what these were. Efforts to contact Mr Chan yesterday were unsuccessful.

Greystar, the building’s management company, said yesterday that the safety of residents was its “highest priority”. “We will be working with an independent structural engineer and local authorities to determine the cause of the accident.” Greystar and BlackRock, investment advisers to the fund that owns the building, expressed condolences to the families of the victims.

A spokesman for the office of the Berkeley mayor, Matthai Chakko, confirmed that local police had received a complaint about noise from the apartment shortly before the collapse.

He said the building has been fully inspected during construction, which would have included the balconies, had had all the required permits. The collapsed balcony, and debris from its floor and the broken joists, had been removed to a municipal facility for forensic examination, he added.