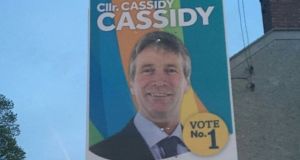 Eugene Cassidy’s poster has become a collectors’ item due to his surname appearing twice and his first name not appearing at all.

Despite the clamour against election posters, candidates – especially first-time candidates – believe they are a necessary evil.

So far, however, 150 cities, towns and villages have imposed local bans, including Limerick, Skibbereen in Cork and Killarney in Kerry.

Balbriggan Solidarity candidate Carah Daniel believes they are defendable, if they are properly put up, properly taken down and properly recycled later, or used again.

“I think that posters are necessary, especially for smaller parties. Solidarity doesn’t take any donations from big businesses while most other parties do.

“[They] can afford alternative advertisements. So, posters are an important way of getting the message across,” she says.

However, even supporters of posters struggle to defend the postering habits of some candidates, who breach sensible rules.

Posters are not supposed to be near, at, or below head-height; nor are they to be erected at traffic junctions, or other dangerous places.

A few posters have already become collectors’ items, such as the one from Meath County Council Fine Gael candidate, farmer Eugene Cassidy.

His posters were printed after his surname was given twice, but with his first name omitted, though he received them too late to do much about it.

“I brought them home and unwrapped them and just said, ‘Oh my God.’ But then I thought sure what can you do, so I put them up anyway,” Cllr “Cassidy” Cassidy told The Sun.