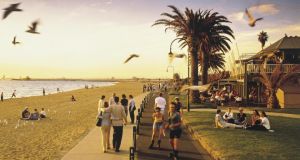 St Kilda, a beachside area in Melbourne, Australia, which, for the fourth year in a row remains the most liveable location of 140 cities surveyed by the Economist Intelligence Unit. Photograph: Tourism Victoria

Dublin may struggle to make it into the top 50 most liveable cities on the planet, but it is apparently still a more desirable place to call home than Rome, London, New York or San Francisco, according to new research from the Economist Intelligence Unit.

The highly regarded research body uses for five categories – stability, education, culture and the environment, healthcare and infrastructure – to rank 140 cities around the world. Dublin now sits alongside Houston and Milan in 46th position, up three places from last year.

When major European cities are looked at in isolation, Rome, Budapest, Manchester, Reykjavik, London, Lisbon and Athens are all declared to be less attractive places than Dublin to live.

Melbourne remains the most liveable location of the 140 cities surveyed – the fourth consecutive year it has won the accolade – followed by the Austrian capital, Vienna. Vancouver, which was the most liveable city surveyed until 2011, lies in third place, just above Toronto.

Unsurprisingly given the scale of the conflict raging across Syria, Damascus is now the least liveable city surveyed. The escalation of violence in Iraq is not reflected in the rankings because Baghdad is not included in the survey.

Despite events in Israel, Tel Aviv’s rating remains unchanged, largely because the existing stability score already accounted for the fraught political situation in the region.

The survey also included a listing of cities whose liveability has declined most in the past five years.

Damascus again features prominently, having recorded a 28 per cent decline in the last five years. Others falling down the rankings include St Petersburg and Moscow, both declining by 3.3 per cent, while Sofia is down 3.5 per cent and Athens is down by 3.7 per cent. Kiev, capital of strife-torn Ukraine, dropped 17.8 per cent and is ranked 124th.

“The ranking . . . shows that since 2009, average liveability across the world has fallen by 0.7 per cent, led by a 1.3 per cent fall in the score for stability and safety,” the EIU said in a statement. “While this may seem marginal, it highlights that over 50 of the cities surveyed have seen declines in liveability over the last five years.”

In local terms, the EIU’s findings are in stark contrast to a separate survey published earlier this summer which declared Ireland to be the best country in the world. In that survey, titled the Good Country Index, the Republic’s overall contribution to humanity and the planet saw it take the top spot.

That index ranked nations according to their overall contribution to humanity using 35 indicators from the United Nations, the World Bank and other international institutions, across seven categories.