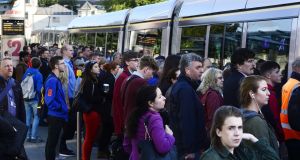 Hundreds of commuters have been affected by delays on the Luas on Wednesday morning.

The green line, which runs through south Dublin from Brides Glen to St Stephens Green, has seen delays since 7.50am.

A Luas spokeswoman said there was a power outage at the Sandyford depot, which had since been fixed.

Commuters have reported waiting times of up to 30 minutes to board a Luas, although the Luas spokeswoman said the delays were between five and eight minutes.

She said services were expected to return to normal after peak hour.