Donald Trump for US president? ‘Dramatic announcement’ to follow 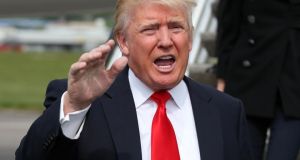 Donald Trump is in Co Clare. Speaking to radio, he said: “I’m going to announce something that I think is going to be very dramatic and is going to make a lot of people very happy on June 16th.” Photograph: PA

US businessman Donald Trump has said he will make a “dramatic” announcement on June 16th amid speculation that he could run for the White House.

Speaking on Newstalk FM this morning, Mr Trump said: “I’m going to announce something that I think is going to be very dramatic and is going to make a lot of people very happy on June 16th.

“It will be something.”

Mr Trump cited unemployment and Obamacare as some of the biggest problems facing the US.

“The real unemployment in the United States is very, very high. A lot of people think it’s 19 per cent. We have this crazy calculation, as an example, that if you look for a job, you’re looking and looking and looking, and then you give up,” he said.

“The fact is we really have problems in the United States, big problems. Whether it’s terrorism, whether it’s wars, nothing goes right. Obamacare is a disaster. The war veterans are taken care of so badly. The military has to be rebuilt and restocked. There are so many problems. And, of course, we owe $18 trillion,” he added.

Mr Trump, a Republican, said he is “very much like a lot of the people in Ireland.”

The New York native also said that he isn’t sure whether Hillary Clinton will receive the Democratic nomination for the White House. “She’s got a lot of problems, between the email scandal and lots of other things. She’s got a difficult time ahead of her,” he said.

“Two months ago I would have said absolutely, but even her poll numbers are coming down substantially so it’s going to be interesting to see. There’s a lot of people who are thinking about running who have never thought about it before.”

Mr Trump agreed that divisions in the Republican party have left the gates open for the Democrats.

Mr Trump is in Ireland this week visiting his golf resort in Doonbeg, Co Clare, which he acquired for €15 million last year.