Detergent firm fined over spill that killed 5,000 fish in Tolka 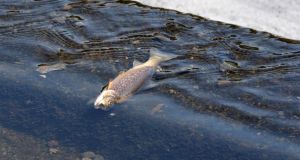 One of the fish killed when a spillage of concentrated detergent at Alma Hygiene’s premises on Bannow Road, Cabra, caused a leak into a storm drain at Finglas Road Bridge on July 22nd and 23rd, 2014. Photograph: Alan Betson

The Green Party has welcomed the conviction of a company for pollution that killed 5,000 fish in Dublin’s river Tolka in July last year.

It was fined €250 and ordered to pay legal costs of over €34,000 after admitting it leaked detergent into the river.

During the case, details of which emerged yesterday, the court heard a spillage of concentrated detergent at the firm’s premises on Bannow Road, Cabra, caused a leak into a storm drain at Finglas Road Bridge on July 22nd and 23rd, 2014.

An investigation found over 5,000 fish, including brown trout and sea trout, were killed on a 4.5km stretch between Finglas Road Bridge and East Wall. The river had been repopulated with fish in recent years following a significant improvement in water quality.

Alma Hygiene was fined €250 and directed to pay legal costs and expenses to IFI and Dublin City Council of €34,603.45, including €7,740 towards mitigation measures.

IFI said the company showed full co-operation during the investigation and quickly worked to clean up the spillage and prevent further discharge.

Legal representatives for Alma Hygiene said the spillage was the result of human error.

Local Green Party councillor Ciaran Cuffe welcomed the court ruling. “Environmental crimes must be taken seriously and I am pleased that, in this instance, justice has been served.”