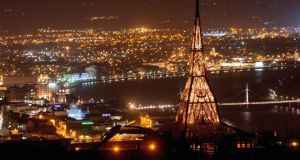 David Best’s wooden temple in Derry which will be set alight on the evening of Saturday, March 21st. Photograph: Martin McKeown/Inpresspics.com

Californian artist David Best is inviting people from Derry and beyond to symbolically burn their troubles away in a massive fire next week.

Best is on the Waterside in Derry with about 50 workers and volunteers, putting the finishing touches to a massive plywood temple that will be ceremonially torched on the evening of Saturday, March 21st.

The 69-year-old artist, who has strong Irish connections, is, among other things, a sort of pyrotechnic sculptor whose work features regularly at the annual Burning Man festivals in the Nevada desert in the US.

He built eight of the 15 temples that have been constructed annually in the desert since 2000. They are then ritually burned in front of 40,000people at the end of the event.

Best has been enjoying himself since arriving in Derry, meeting local people, inspiring and teaching the volunteers, and even attending the Sinn Féin Ardfheis last weekend to get a feel for Irish politics.

From this Saturday, March 14th, people are being invited to visit the Temple at the Top of the Hill on the Waterside to view the construction and also, if they want, to leave letters, cards, mementoes and other personal “offerings” to be consumed in the fire.

“Maybe somebody who did something like, say, putting a bomb in somebody’s house and were sorry, might leave something in the Temple to be set alight – it will help them get a form of closure.”

He says the response so far in Derry has been 99 per cent positive, although a small minority “thinks we are just a bunch of hippies wasting our time”.