FG contest: Some in Varadkar camp suggest Coveney at fault for poor showing in 2016 poll 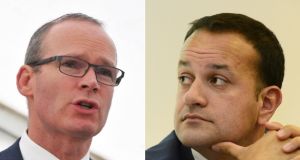 Preparations for the Fine Gael leadership battle are intensifying, with supporters of Simon Coveney (left) and Leo Varadkar (right) primed for the contest to begin next week.

Fine Gael leadership hopeful Simon Coveney has sought to use his previous European Union experience as minister for agriculture to burnish his credentials as a possible future taoiseach who will have to deal with the consequences of Brexit.

At private Fine Gael meetings this week, Mr Coveney cited his experience in negotiating the Common Agricultural Policy during Ireland’s presidency of the EU in 2013, as well as his period as an MEP between 2004 and 2007.

Mr Coveney also told some of those present at a meeting in Meath that the greatest potential area of growth for Fine Gael at the next election is in his Munster base, where it had a poor performance at last year’s election.

Targets in Cork, Kerry and Tipperary have been mentioned by his supporters.

This was met with scepticism by those in the camp of Minister for Social Protection Leo Varadkar, the other main leadership contender, who suggested Mr Coveney was partly to blame for the poor showing in 2016.

A number of Fine Gael sources have claimed a Dublin leader would be their favoured option, with concern that Mr Coveney shares his Cork South Central constituency with Fianna Fáil leader Micheál Martin.

This would raise the prospect of both potential taoisigh at the next election coming from the same constituency.

Preparations for the Fine Gael leadership battle are intensifying, with supporters of Mr Coveney and Mr Varadkar primed for the contest to begin next week. Minister for Education Richard Bruton and Tánaiste Frances Fitzgerald are still assessing whether to run.

Set to stand aside

It is expected Taoiseach Enda Kenny will stand aside either next week or the week after, with Michel Barnier, the European Commission’s chief Brexit negotiator, due to address a meeting of the European People’s Party taking place on May 11th and 12th in Wicklow.

Mr Kenny’s friends still believe he will address the issue next week, although it was remarked by one that he wanted to be Taoiseach for the EPP event.

He will still be Taoiseach during the process of electing a new leader, which will take about three weeks, and for a period thereafter, as the new Fine Gael leader renews Government deals with Independents and Fianna Fáil before being elected Taoiseach by the Dáil.

It is understood Mr Kenny believes this period could be as long as three weeks.

Mr Varadkar yesterday said he thought there should be a televised debate between those hoping to succeed Mr Kenny. Mr Coveney’s spokeswoman said he would participate in any debate, if approved by the Fine Gael executive council.

Fine Gael officials have said they do not want to hold a televised debate, and senior party sources firmly reiterated that view last night.

The party is currently planning four hustings for party members, although these will be open to the media.

Mr Varadkar was asked yesterday about the future composition of his Cabinet, if he wins.

“That’s something I haven’t given consideration to at this stage,” he said. “I think before I have any or I answer any questions asked by the media about future positions that other people may hold, I should have that conversation with them first - and I haven’t had those conversations.”