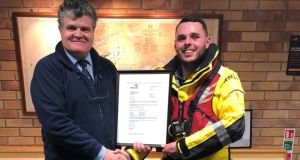 A 25-year-old west Cork man is to become the first Irishman to be honoured by the RNLI in over a decade for his part in the rescue of six fishermen facing possible death in a horrendous storm almost two years ago.

Dean Hegarty from Castletownbere RNLI was serving as Coxswain of the RNLI Annette Hutton for the first time when the crew launched on the night of October 10th, 2018 after the trawler, Clodagh O sent out a May Day call.

Castletownbere Lifeboat operations manager, Paul Stevens said the Bronze Medal for Gallantry to Mr Hegarty was a tremendous honour for the station which has only been in existence since 1997.

“Dean getting the medal and lifeboat mechanic, Martin O’Donoghue and volunteers Seamus Harrington, John Paul Downey and David Fenton getting Letters of Thanks from the RNLI is a great honour for the station.

“I supposed what marked out the rescue was the weather conditions on the night – it was a horrendous night, dark, with a Force 9 Gale and four to five metre swells and mountainous seas so it was a very challenging operation.

“The Clodagh O had lost power and was drifting towards the cliffs at an area known locally as The Pipers and she was only 20 metres from the rocks so the lifeboat really had only one chance to get a line aboard.

The RNLI Annette Hutton was able to tow the trawler out of danger before towing her back to Castletownbere at a rate of just half a knot in case the line snapped until they got into the shelter of the harbour and increased speed.

Mr Stevens, who pointed out that the deputy launching authority Michael Martin-Sullivan was also commended for his sound judgement, said the rescue require “absolute precision and split-second decision making”, he said.

Mr Stevens said it is the first time that any member of the Castletownbere RNLI was honoured with a medal since the station was established 22 years ago and everyone attached to the station was extremely proud.

‘We are extremely proud of our lifeboat crew for their incredibly brave actions that night, which resulted in the saving of six lives. The RNLI does not give out awards for gallantry lightly and to receive one is a great privilege.

“It is very significant because the RNLI every day around Ireland and England and Wales and Scotland, launch lifeboats and do extraordinary things but this rescue was particularly spectacular and difficult,” he said.

The Castletownbere RNLI lifeboat crew were informed of the decision at a crew meeting in the station earlier this week by RNLI Lifesaving Manager Sean Dillon, who delivered a letter from RNLI Chief Executive Mark Dowie.

In informing Castletownbere RNLI of the award, Mr Dowie said: ‘In making the awards, the RNLI Trustees recognise the complexity of the service, the level of risk and the quality of decision making by all involved in the service.

“These awards mark the courage, skill and dedication shown by the Coxswain, crew and officials involved, and are a testament to outstanding teamwork and seamanship in perilous conditions which resulted in the successful rescue of six people.”