Liner torpedoed off Kinsale by German submarine in May 1915 with loss of 1,198 lives 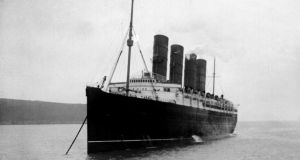 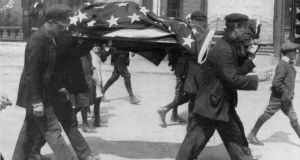 The body of a US citizen is carried through the streets of Queenstown (now Cobh), one of the victims of the sinking of the RMS Lusitania by a German U-boat on May 17th, May 1915. File photograph: Hulton Archive/Getty Images

A series of events is being organised in Co Cork over coming months to commemorate the 100th anniversary of the sinking of the Lusitania on May 7th, 1915, with the loss of 1,198 passengers and crew.

Organisers hope President Michael D Higgins will be able to attend several of the services to remember those who lost their lives in the tragedy.

The Cunard liner, RMS Lusitania, with 1,959 passengers and crew on board, was torpedoed some 18km off the Old Head of Kinsale by the German submarine U20 while en route from New York to Liverpool. It sank within 18 minutes, with only 761 surviving.

Of the 1,198 who perished, some 128 were US citizens. The sinking had a major impact on public opinion in the US and is widely viewed as having played a significant part in the decision of President Woodrow Wilson to enter the first World War on the side of the Allies in 1917.

Several Cork communities linked to the tragedy have come together to organise a series of commemorative events over a five-month period, starting from this Sunday in Cobh, where many of the bodies were brought ashore after the sinking. Some 169 victims are buried in the Old Church Cemetery there.

Chairman of Cobh Tourism, Hendrick Verwey, said the programme of commemoration will be launched in the town on Sunday, when the carillonneur of St Colman’s Cathedral, Adrian Gerbruers, will present a recital. Schoolchildren will also read the names of the 169 victims buried in the town.

“The people of Cobh witnessed at first hand the trauma and heartbreak of the sinking as the dead, injured and bereaved were all brought ashore here, and the Lusitania Peace Memorial in the town epitomises the efforts made to rescue survivors, recover bodies and comfort the bereaved,” he said.

On May 7th, President Higgins will attend a commemoration in the town which will include a parade of ships with white lights representing the rescue boats coming home. Meanwhile, 1,198 white flowers will be placed in the sea to represent all those who died.

Cobh will also host an exhibition of old photographs in the former Cunard Ticket Office. It will receive a visit from the Cunard liner Queen Victoria, which is embarking on a Lusitania Remembered voyage for interested persons.

In West Cork, Kinsale History Society has traced the relatives of a coroner for the area, John Horgan, and a 14-man jury, which returned a verdict of unlawful killing against Kaiser Wilhelm and the German forces at an inquest held within days of the sinking.

The society’s secretary, Dermot Ryan, said the group is going to hold a short re-enactment of the inquest. It has received confirmation from UK- and US-based descendants of those who were aboard the liner that they plan to attend the ceremonies.

For further information on Lusitania commemorations in Cork, see visitcorkcounty.com