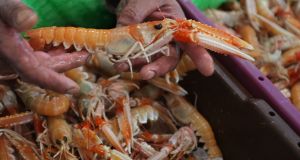 Management of a Connemara seafood plant that has been forced to sell up said it had been squeezed out by a Government policy that was concentrating fish quotas in the hands of a few.

Iasc Mara Teoranta in the State fishery harbour of Ros-a-Mhíl said it will have to find another buyer or close with the loss of 25 direct jobs, after more than 40 years in business.

“This means that Connemara has lost its major fish processing plant, and places a question mark over the future of Ros-a-Mhíl as a fishery harbour,” Mr Ó Cuív said.

He has called on the Government to convene a round-table discussion to examine the long-term implications.

Iasc Mara Teo, which employed more than 200 people at its peak and had an annual turnover of between €5 and €6 million, depended on landings of mackerel and herring from Ros-a-Mhil boats.

However, several of those vessels have been bought up or contracted to Killybegs-based companies in recent years, depriving Ros-a-Mhíl of their landings.

Cathal Groonell, managing director of Iasc Mara, said the Government’s stated policy of ensuring an economic link between quota allocation and the nearest coastal communities was “not happening on the ground”.

In a statement, the company said it was now uneconomic to continue, given the dramatic reduction in supplies.

“The factory has modern processing, freezing and cold storage facilities and it is hoped to find a buyer that will continue to operate it as a fish processing facility,” the company said.

If it is unable to attract a trade buyer, it will have to close with the loss of 25 job and with a wider impact on local businesses supplying , it said.

The factory has 3.5 acres of land located to the Ros-a-Mhíl harbour and close to the Aran islands ferry terminal.

Mr Groonell said a delegation from Ros-a-Mhíl had warned of the loss of supplies in an Oireachtas committee hearing, and had also met Minister for Marine Michael Creed at the Harnessing Our Ocean Wealth conference in Galway two weeks ago.

Asked to comment, a spokesman for Mr Creed said the State’s policy on management of fish quotas was on the department’s website, and “arrangements between licensed vessel owners and seafood processing firms in relation to the supply of fish . . . are private commercial matters between the parties concerned”.

The Department of Agriculture, Marine and Food’s website states: “Any movement towards privatisation and concentration of rights into the hands of large companies would seriously risk fishing vessels losing an economic link with Ireland’s coastal communities and undermining the socio-economic importance of the fishing industry in the coastal communities dependant on fishing.”