Conlon lived life with an honest fury against injustice 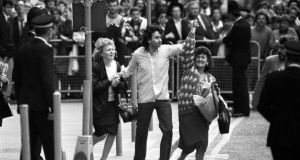 Gerry Conlon outside the Old Bailey in London in 1989 after being released for being wrongly convicted of the Guilford pub bombings. File Photograph: PA Wire

As well as the words, it was the raised clenched fist, the passion and anger in his voice and in his face that conveyed such a powerful impression of a man who had suffered a great injustice.

In his subsequent 25 years of freedom, Gerry Conlon lived life with the same fervour and honest fury that he demonstrated on the day he was freed from prison. He died from a cancer that was late diagnosed.

As his friend SDLP Assembly member Alex Attwood said today, he lived his life with “urgency, anger, exasperation, intensity and a thirst for justice - he was making up for lost time”.

Up until recently he had been involved in a number of campaigns. He was also prepared to fight unpopular causes, such as saying that the two men convicted for the 2009 Continuity IRA murder of Constable Stephen Carroll may have been victims of “a miscarriage of justice”.

A supporter of the SDLP, he had no love of dissident republicanism. However, his own experience of the criminal and judicial system meant he wanted to test whether the evidence supported the convictions of Brendan McConville and John Paul Wootton. He believed it didn’t, although the courts held otherwise.

He also campaigned for Old Bailey bomber Marian Price when her release licence was revoked, claiming she was a victim of internment and a denial of due process.

“What happened to one of us could happen to all of us,” he said when campaigning for Ms Price.

It was that zeal, as Mr Attwood noted, that drove him on relentlessly, almost obsessively.

As Mr Attwood said today: “His death at 60 years of age is far too young for someone who had suffered far too much, who had then given so much and had so much more to give.”