Concern over dredging and dumping plans in Dublin Bay 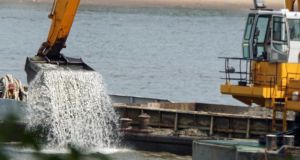 Dublin Port plans to deepen its navigation channel and dump 10 million tonnes of silt at sea must be considered in conjunction with plans by Dún Laoghaire Harbour Company to dredge a navigation channel that involves dumping in the same area.

An Taisce voiced concern in a submission to the Environmental Protection Agency (EPA) asking that the cumulative effects of both dredging and dumping schemes be examined.

Both Dublin Port and Dún Laoghaire are deepening their navigations in rival bids to capture cruise business from larger ships. Dublin Port is also seeking to reconfigure its facilities to create easier access for ferry services.

Both schemes are required to apply for a licence from the EPA to dump in the bay which is in a Unesco biosphere reserve and contains a range of designations under the EU habitats and birds directives.

Dublin Port Company’s application for an EPA licence incorporates a “dumping at sea” proposal involving 10 million tonnes of spoil over a five-year period.

Dún Laoghaire Harbour Company is planning to dump one million tonnes of spoil. Dumping from both schemes is to take place in the vicinity of the Bulford Bank. Strong tidal sea movements and currents in the area are expected to disperse the spoil.

Both schemes are also required to have foreshore licences and licences to dump at sea, which would be issued by the EPA.

But An Taisce said the schemes should not be assessed in isolation and the cumulative effect of the dumping should be taken into account.

The organisation’s heritage officer Ian Lumley said there were “significant impact concerns on the ecology of the bay” and particularly in relation to the protected reefs and the impact on harbour porpoises.