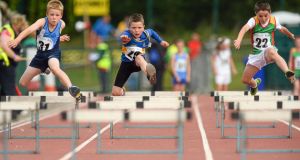 More than 3,000 young people were at Athlone Institute of Technology in Westmeath at the weekend for the 2013 Community Games national finals.

While the competition is serious, there’s also “serious fun“ to be had, according to friends and teammates Oisin McElwain, Killian McAdam, David Leane and Killian Conlon, all from Monaghan town.

The Farney county boys came fifth in their relay race but remained upbeat. “We came last but we’ll be back and better again next year. We’re going to hang around, have the craic and head to the funfair,” said Oisin.

While some come with the sole intent of plundering the Community Games medal chest, for most it’s a chance to make new friends.

Sisters Áine (12) and Therese Nolan (10) from Myshall in Carlow were enjoying being spectators between their own competitions. Áine was competing in the under-13 mixed relay, while Therese took part in the under-10 100m race. “We have a great passion for our sports – you need to because you have to put in so much training,” said Áine.

Having commentated on the track and field finals for 20 years, Anthony Fitzsimons helped capture the excitement of the races as he willed competitors across the finish line.

Friends Eimear Corri (15) and Louise Stack (15) from Laois were relaxing on the pitch, having competed earlier in the day. Louise raced in the marathon and the relay.

“I’m always a bit nervous the night before competitions but it’s good at community games because you have plenty of friends around you,” she said.

“You’re up here competing in the sport you love but you also get to meet people who have the same interest as you and they’re from all over the country. ” said Eimear.

John Byrne, chief executive of the Community Games said: “The standard this year is remarkable. Some of the children competing in the athletics are fantastic so hopefully we’ll have a few Sonia O’Sullivans and Rob Heffernans coming up.”