‘I’ve done the things that are not only in my heart, but are worthwhile doing’

Cmdr Chris Hadfield returned to Ireland to sign copies of his newest book You Are Here - Around the World in 92 Minutes and to do more promotion for Tourism Ireland. Video: Ronan McGreevy 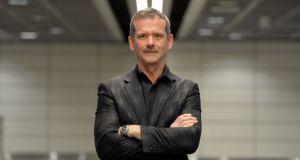 Chris Hadfield’s You Are Here is a compilation of 150 photographs culled from the 45,000 he took while in space.

Ireland’s favourite astronaut was back in Dublin and it felt like he had never been away.

Cmdr Chris Hadfield returned to Ireland to sign copies of his newest book You Are Here - Around the World in 92 Minutes and to do more promotion for Tourism Ireland.

The public queued from 8.30am on Sunday morning for the 11am signing at Dubray Books in Grafton Street and similar scenes were experienced at the two book signings in Eason over the weekend.

You Are Here is a compilation of 150 photographs culled from the 45,000 Cmdr Hadfield took while in space. His wife suggested the method for selection. Imagine a friend was with you in the cupola of the International Space Station (ISS). What would you show him or her first?

Some such as our own island and Britain with the Northern lights shimmering behind us or the boot of Italy are instantly familiar to us. Others such as the psychedelic lagoons of the northern Crimea look downright weird and out of this world.

The book is the number one hardback bestseller in the UK at present. All profits go to the Red Cross.

Hadfield maintained that while taking the photographs from space, he was the eyes of humanity. The photographs, in effect, belong to everybody and therefore he decided not to profit from the book. “It makes sense to share it. My wife and I talked about it and we thought the Red Cross was a wonderful charity. It was easy.

“I’ve done the things that are not only in my heart, but are worthwhile doing. To see that other people find them important and interesting is a real delight. It’s a great pleasure to come to Dublin and see folks who want to see the world through my eyes.”

His previous book An Astronaut’s Guide to Life on Earth has been a worldwide bestseller. It’s been translated into 17 languages and is being made into a sitcom by ABC in the US.

Last year he was announced as an ambassador for Tourism Ireland - a role he has taken on free of charge in return for a tour of the country. His daughter Kristin was once a PhD student at Trinity College Dublin and is now living in Chicago.

Cmdr Hadfield is interested in going back to university, not as a professor, but to study paleontology. “We tend to have a very distorted view of ourselves,” he said. “The more fact we can put into it, the better I feel.”