Reaction to High Court ruling by Mr Donald Binchy that an order made by him preventing publication of financial information about Denis O’Brien wasn't intended to prohibit fair reporting of any utterances of the Dáil. Video: Bryan O'Brien 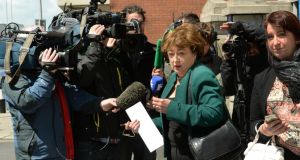 Catherine Murphy TD leaving the Four Courts on Tuesday. The Irish Times and RTÉ went to the High Court seeking confirmation that a speech made by Ms Murphy in the Dáil could be reported by the media. Photograph: Cyril Byrne/The Irish Times 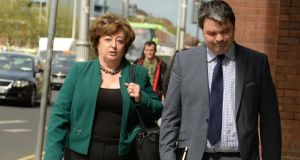 Independent TD Catherine Murphy has welcomed the clarification of the High Court ruling that an order preventing the publication of financial information about Denis O’Brien was not intended to prohibit fair reporting of any utterances of the Dáil.

The Irish Times and RTÉ went to the High Court on Tuesday morning seeking confirmation that a speech made by Ms Murphy in the Dáil could be reported by the media.

Mr Justice Donald Binchy said on Tuesday morning it was understandable that parties had come to court to seek clarification, but he had not intended in his High Court order, made on May 21st, to inhibit the entitlement of media to report on utterances of the Dáil.

Ms Murphy said the comments vindicate the rights of elected representatives to raise matters of public concern and for those issues to be fairly reported in our media.

“The substance of my concerns has always been to have a full, competent and independent inquiry into the wider governance issues in IBRC and I will continue to pursue that through the appropriate democratic channels available to me in the Oireachtas, ” she said.

Fianna Fáil leader Micheál Martin has welcomed the ruling in which he said it was never his intention to restrict the media’s right to report on statements made in the Dáil.

Mr Martin commented: “This is a very welcome and important decision. I am very pleased that Mr Justice Binchy has said it was never the intention of his High Court order in Denis O’Brien’s application against RTÉ to restrict reporting on comments made in the Dáil. This is a good day for parliamentary democracy and for freedom of the press.

“Today’s judgement vindicates Article 15 of the Constitution which protects what is said in the Oireachtas and the right of the media to freely report all statements made by elected representatives in either the Dáil or Seanad.”

The National Union of Journalists said it welcomed Mr Justice Binchy’s clarification that there was no restraint on the media covering parliamentary proceedings arising from his injunction granted last month to Mr O’Brien.

“This is an unambiguous ruling in favour of democracy,” said Séamus Dooley, Irish Secretary of the union.

“The right of parliamentarians to speak under privilege is a cornerstone of our democracy and the right of the media to fairly and accurately report such proceedings is fundamental. Today is a good day for democracy and the determination will be warmly welcomed by all who believe in the democratic principles of our Republic.”

He added, however, that it was “regrettable that motives have been imputed to journalists and the media organisations whose sole purpose was the reporting of statements made under parliamentary privilege by an elected representative exercising her right under the constitution”.

Mark Kelly, director of the Irish Council for Civil Liberties, said it was “astonishing” that legal advice to RTE and the Irish Times ever allowed either organisation to think that the injunction granted to Mr O’Brien could also have applied to matters subsequently raised in the Dáil, thereby curtailing their reporting.