Royal College of Surgeons student Elysha Brennan was crowned Rose of Tralee winner 2015 after a raucous two days in Co Kerry on Tuesday. 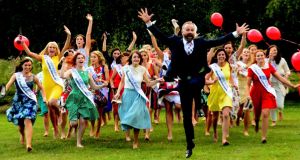 Meath Rose and cancer survivor Elysha Brennan was crowned Rose of Tralee winner 2015 after a raucous two days in Co Kerry on Tuesday.

The 22-year-old from Bettystown, Co Meath, is a student at the Royal College of Surgeons, Dublin, but has considered alternative career options such as “joining the circus”.

The win comes after some difficult times for Ms Brennan who was diagnosed with Hodgkin’s Lymphoma during her repeat Leaving Certificate year when she was 19.

She said she can remember feeling very stressed and tired, and was diagnosed two weeks before her exams.

She had to start treatment straight away and underwent chemotherapy and radiation therapy.

“It felt like being hit by a double decker bus,” she said. “It was a huge shock. The first thought with cancer was ‘I’m going to die’.

“I was given the news that I was in complete remission in February of 2013,” she told host Dáithí Ó Sé. “Two and a half years later, I’m happy and healthy and in a course that I love.”

She came through her exams with 575 points to get into medical school where she is going into her third year. Her ambition is to be a paediatrician.

Ms Brennan has also been involved with musical theatre from an early age, and has “a passion for all things song and dance”.

“I have been lucky enough to have taken part in the Olympia Theatre Dublin Christmas pantomimes and a Michael Jackson tribute show,” she said.

“I made a bucket list two years ago and am slowly ticking things off, including visiting the Statue of Liberty in New York and Greek island hopping.”

Earlier, one of the first to take to the stage at the Dome in Tralee, Co Kerry, was Galway Rose Olga Lee, who wasted no time basking in the glory of her native county’s victory over Tipperary in the All-Ireland Hurling semi-final on Sunday.

Tipperary Rose Alison Brolan had been “a little bit cocky” about the match beforehand, according to Ms Lee.

There has also been some Irish dancing, with South Carolina Rose Shannon Kelahan treating the audience to a jig around the stage.

The 21-year-old marine science student asked host Dáithí Ó Sé to remove her shoes before telling him to “be careful” as his suit was “fitting a little tight”.

The mischievous nature of the Roses continued with Toronto Rose Erika Healy, who told the crowd how, as a child, she had flushed her father’s wedding ring down the toilet and cut her brother’s hair off as he slept before an awards ceremony.

Ms Healy, whose parents are from Co Kerry but who moved to Canada when her mother was pregnant with her in 1987, got a cheer from the crowd when she said: “I am proud to say I’m born in Canada, but made in Ireland.”

For her party piece, the Toronto Rose, donning Kerry football socks to her knees, produced an impressive display with a skipping rope.

That was, however, not before the habitual “bear with me” as she got prepared, while Dáithí Ó Sé asked the crowd to “talk amongst yourselves”.

Germany Rose Róisín Ní Mhathúna (22) was born in Birmingham, England, but raised in Rush, Dublin. She said her Birmingham roots were the catalyst for a life-long love of Aston Villa football club and that she had been to more than 200 games with her father.

As she had been forced to miss the FA Cup Final last year in order to qualify for the Rose of Tralee, festival organisers brought the FA Cup trophy on stage and played a specially recorded video message from an unnamed Aston Villa player wishing her good luck.

She said she was unable to tell the crowd his name however as she was too excited and Dáithí Ó Sé was forced to move on.