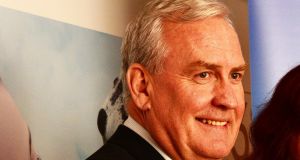 Canadian Ambassador to Ireland Kevin Vickers said of Ed O’Loughlin’s book: “All the places you see in the book have been places I have been too.” Photograph: Cyril Byrne

Canadian ambassador Kevin Vickers said his ambition as a boy had been to join the Mounties (the Royal Canadian Mounted Police).

He was speaking as he launched the new novel by former Irish Times journalist Ed O’Loughlin. Minds of Winter is set in the Arctic and references both the present day and the era of polar exploration, particularly the search for the Northwest Passage .

Mr Vickers said he had been particularly taken by the doomed attempt by Sir John Franklin to find the Northwest Passage in the 1840s. “I got to live my dream for 10 years. All the places you see in the book have been places I have been too,” he said.

“I left my heart with the aboriginal people up North. Their values of respecting the dignity of all people and sharing whatever they have with whoever comes their way are things we can learn by.”

Mr Vickers came to prominence in Ireland earlier this year when he tackled a protester who disrupted a commemoration for the British soldiers killed in the Easter Rising.

Minds of Winter is Mr O’Loughlin’s third novel. He was born in Toronto, but now lives in Dublin.