Cabinet to be briefed on coastal damage costs 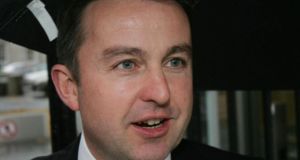 Minister for State at the OPW Brian Hayes has said ¤45m is available for emergency coastal protection but the damage is expected to comfortably exceed that amount, having left a trail of destruction along the west and south coasts.

The Cabinet is to be briefed next week on the cost of the damage to roads, promenades and coastal defences caused by storms which battered the west and south coasts since December 18.

In a statement after its meeting yesterday the National Coordination Group on Recent Severe Weather said it would ask local authorities to submit estimates of the cost of repairs, and submit them to Government next week, as part of a preliminary report on the storm damage.

Minister for State at the OPW Brian Hayes has said €45m is available for emergency coastal protection but the damage is expected to comfortably exceed that amount, having left a trail of destruction along the west and south coasts.

Some estimates put the cost of damage to public and private facilities at least as high as the €244 million cost of the floods in November 2009.

Fianna Fáil has described the provision of €45million as inadequate with party Spokesman on Public Expenditure Sean Fleming remarking that the provision represents a drop of €8million from the previous year. “The fact is the Government has not been investing enough money to prepare communities for possible storm and flood damage” he said.

However each of the affected local authorities yesterday said it was too early to think in terms of repair costs as they concentrated on the clean up. The authorities all said they would have a better idea of the costs later this week. Many said a complicating factor was that before a number of the roads and promenades could be reinstated, costal defences including rock armour would have to be renewed.

One possible line of financial aid, the EU Solidarity Fund, has been identified by Irish MEPS . The €500 million-a-year fund was set up to respond to major natural disasters and express European solidarity to disaster-stricken regions within the EU.

Since its inception in 2002, it has been used for 56 disasters covering a range of floods, forest fires, earthquakes, storms and drought. A total of 23 European countries have so far benefited to the tune of €3.5 billion.

Ireland West MEP Jim Higgins said he has been told the fund would be available to address the clean-up, but only if the Irish Government “applies immediately”.

He said “the EU Solidarity Fund has an annual budget of €500m and provides emergency funding following a major disaster in a member state.”

However he warned “the clock is ticking. Any application for funding has to be received by the Commission within 10 weeks of the date of the first damage caused by the disaster.”

Mr Higgins concluded, “EU funding is available, all we need to do is apply”.

“Cleaning up is about more than getting us back to where we were four weeks ago; we also need to install improved flood defences to avoid repeat circumstances. Areas where people will struggle to obtain affordable flood insurance must be a priority,” he said.

The National Coordinating Group on Severe Weather, which streamlined reaction to severe flooding in 2009, will oversee plans from the Office of Public Works, the Departments of Transport, Environment and Health as well as local authorities and the HSE, as they address damage caused by the tidal surges and high winds of the last week.

The initiative to tap the EU for funds comes is in advance of any indication from the insurance industry as to the probable total cost of the storms, which is due in about three weeks’ time.