Former taoiseach says politicians, not soldiers, should lecture on the Proclamation 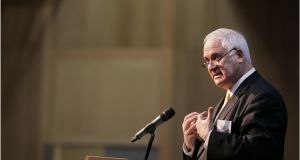 John Bruton was part of a guard of honour at the 50th anniversary of the Rising in 1966. Photograph: Dara Mac Dónaill

Former taoiseach John Bruton has criticised the Government’s decision to send Defence Forces officers with Tricolours and copies of the Proclamation to the country’s primary schools as part of the Easter Rising 1916 commemoration.

Mr Bruton said it was important that the Defence Forces were involved in the Rising commemorations as the ultimate guarantor of the State. He said it was strictly non-political and “should be kept separate from anything that has any colour of political advocacy”.

“Having said that, I have to say I was a little uncomfortable with the idea that Army officers should be invited to visit schools to talk about a document prepared by a small group of people which initiated a campaign that involved violence . . . which, to put it at its least, was not supported by the majority of the people at the time it was undertaken.”

Saying he had been part of a guard of honour at the 50th anniversary in 1966, inspected by then president Eamon de Valera outside the GPO on Easter Monday, Mr Bruton said politicians, not soldiers, should lecture on the Proclamation.

Former tánaiste and Progressive Democrats leader Michael McDowell said his grandfather, Eoin Mac Neill, was not some kind of “dotty professor” opposed to violence: “He was quite prepared to use it”.

However, he had been a realist in 1916, knowing that the Volunteers had few weapons and were poorly organised, except in Dublin, and should not “contemplate insurrection” when “hopelessly under-armed and under-prepared”.

Mac Neill was later “utterly tough’’ in support of Irish independence, writing “a letter of rebuke” to the archbishop of Tuam for suggesting Irish people were not morally entitled to resist British rule in Ireland.

“He was equally and utterly tough when it came to 1922 and the Civil War . . . he was absolutely clear that violence could be used,’’ he added.

Dr Maurice Manning, chancellor of the National University of Ireland (NUI) and chairman of the advisory group on Irish centenary celebrations, said the group had insisted from the beginning that the commemoration had to be “utterly authentic”. “In 1966 we only told half the story,” he said.

1 Irish health officials to ramp up precautions against coronavirus
2 Woman in her 30s arrested after man fatally stabbed in Co Dublin
3 Coronavirus: Tenerife hotel in quarantine after tourist tests positive
4 Graduates 'not well-equipped' for future workplace
5 McDonald says SF meetings not ‘an affront to democracy’
Real news has value SUBSCRIBE