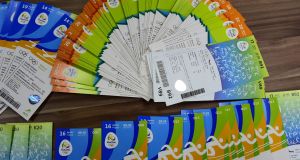 Police in Brazil say they want to arrest a second Irish man as part of their investigation into the alleged touting controversy involving Olympic Council of Ireland (OCI) tickets for the Olympic Games in Rio de Janeiro. Photograph: Tasso Marcelo/AFP/Getty Images.

Police in Brazil say they want to arrest a second Irish man as part of their investigation into the alleged touting controversy involving Olympic Council of Ireland (OCI) tickets for the Olympic Games in Rio de Janeiro.

Officers investigating the matter told a press conference on Monday they have issued arrest warrants for a David Patrick Gilmore, who they identified as Irish, and three other directors of British company THG Sports, including owner Marcus Evans, who also controls Ipswich Town Football Club.

They claim the three men were all involved in the same alleged illegal ticketing operation that led to the arrest of Kevin Mallon in Rio on August 5th.

THG has identified Mr Mallon as its Dublin finance director. He was detained in possession of 823 tickets all believed to have come from the allocation Olympic organisers gave to the OCI.

The company said he was merely acting as a collection point for tickets sold legally by the OCI’s authorised ticket reseller for the Olympics, Dublin firm Pro10.

None of the three men named at the press conference are believed to be in Brazil. Ronaldo Oliveira, the director of specialised units at Rio’s civil police, said Brazil’s federal police had already notified Interpol about the arrest warrants which were issued by the same court that ordered Mr Mallon’s detention.

A Brazilian judge on Monday denied a request from Mr Mallon’s representatives that he be released.

Mr Oliveira said it would be up to the justice systems in the countries where the three men reside to decide if they should be extradited to Brazil but that the three men would be arrested if they sought to enter the country. The two other men are identified as British and Dutch directors of THG.

Investigators say these Brazilian witnesses claim they had bought hospitality packages, including tickets, from THG for the Games as far back as 2014 and that these customers had no knowledge of Pro10.

Mr Barbosa said one THG customer said the company originally promised a reception in the exclusive Copacabana Palace hotel including a lecture from a former Olympic star but instead were told to attend a reception at the Next Flat hotel where Mr Mallon was arrested.

“The hospitality was far less than what these customers were led to expect and we believe it was used as camouflage to justify overcharging for tickets,” he said.

As part of its authorised ticket reseller agreement with the OCI Pro10 can only sell tickets to Irish and European customers. Selling tickets above face value in Brazil is a criminal offence.

THG applied to be an ATR for the Rio Games but its request was denied.

After this application was refused, The Rio Games’ local organising committee (Rocog) discovered that THG was offering hospitality packages to Brazilian companies.

Organisers warned lawyers acting for one THG client that as the company was an unauthorised vendor, packages sold by it constitute a “contractual infraction” of the authorised vendor’s rights and ran the risk of not being honoured at Olympic turnstiles.

As a result of that warning, THG’s parent Marcus Evans Group is being sued by a Brazilian fuel company for the equivalent of €100,000 over the irregular sale of a hospitality packages for the Games in Rio.

The OCI says it is already investigating how its tickets ended up being seized by police. But it has refused a request by sports minister Shane Ross that an independent figure join its three man inquiry. Mr Ross, who met OCI president Patrick Hickey on his arrival in Rio on Sunday night, said he was “absolutely stunned” by the OCI’s refusal and that the government will now study setting up a parallel probe into the matter.

In a statement on Monday, THG Sports said it was “extremely concerned” by the charges brought against it and Mr Mallon which were “entirely without foundation”. Mr Mallon was holding tickets “ for collection by Pro 10 clients in Rio”.

“Our Brazilian lawyers have advised us that there is no evidence to support these allegations, as indeed there is not, and we shall be vigorously defending all charges that have been brought,” it said.

THG said that “as has been reiterated on several occasions including to Rocog, the Irish Olympic Committee, Irish government officials and to the Irish public and media, at no time did Kevin Mallon sell or seek to sell tickets for the Rio Olympic games”.

“It appears that Rocog and the local authorities have an agenda to impede the legitimate activities of THG in order to support the activities of their locally approved hospitality provider.”

Attempts to contact Mr Gilmore have so far been unsuccessful.