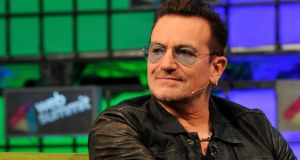 Bono speaks on stage during day three of the Web Summit 2014 at the RDS in Dublin. Photograph: Clodagh Kilcoyne/PA Wire

U2 front man Bono’s private plane lost a hatch as it was coming in to land at Berlin, German airport authorities have said.

There was no risk to the Irish singer in the incident.

Airport spokesman Ralf Kunkel told the dpa news agency that the 32in (80cm) by 40in (100cm) rear hatch landed in the vicinity of Schoenefeld airport, on the south-eastern edge of Berlin.

He said it was not clear why the hatch came off and that German authorities were investigating.

Mr Ralf said the aircraft, which was flying from Dublin, was never in danger of crashing and landed safely.

Bono is in Berlin for the Bambi awards.