Bono brings it all back home to Cedarwood Road 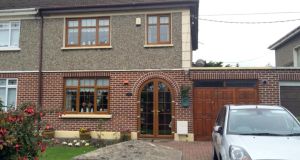 Just when the people of Cedarwood Road thought they had seen the back of bus loads of tourists seeking out where Bono grew up, the U2 singer has gone and written a song about it.

For the past three decades, fans have turned up outside Bono’s childhood home in north Dublin, despite the fact he has not lived there since the early 1980s.

Some come with serious intent, others – such as a group of spoof Hare Krishnas who bowed and chanted outside the house – came to satirise the cult of Bono.

Over the decades, the number of visitors to the street has waxed and waned along with the fortunes of U2, usually peaking after the release of a new album or the latest Croke Park concert.

With the new U2 album Songs of Innocence arriving unannounced into the accounts of 500 million iTunes subscribers last week, there was bound to be more curiosity about the north Dublin street where the singer grew up.

Cedarwood Road was part of a new estate in Ballymun when Bono was born in 1960. It remains a thoroughly respectable location (now Glasnevin) with the sturdy grey pebbled-dashed facades and neatly kept gardens typical of the period.

This ordinary suburban street has produced not only Bono but his childhood friends Gavin Friday and the artist Guggi, along with the recruitment entrepreneur Rosaleen Blair.

In the lyrics of the song Bono invokes a Dublin of the 1960s and 1970s where “if the door is open it isn’t theft” and “foolish pride gets you out the door”. Cedarwood Road is a place where “friendship once it’s won, it’s won” but where enemies lurk too.

He also writes about a cherry blossom tree. Sadly, neighbours say it was dug up many years ago by the council because its roots were causing cracks in the pavement.

“He’ll always be Paul Hewson to me. I never found him to be derogatory or disrespectful,” said Vera Murphy at No 1 Cedarwood Road, across the road from No 10 where Bono grew up. Her son Anthony was also bitten by the music bug and was the original drummer in the Virgin Prunes.

Like many other neighbours, she is puzzled by Bono’s reference to Cedarwood Road being a “war zone” in his teens. “We’re at the entrance to the estate and we see a lot, but I never saw a war zone, hand on heart,” she said.

DJ Bob Conway, who was a contemporary of Bono and grew up three doors away, says the song clearly shows the U2 singer has ambivalent feelings about where he grew up.

“It wasn’t just about reliving his past. It was about getting out a bit of the past and exorcising it. It’s the same reason why there’s a song on the album about his mum Iris [who died of a brain aneurysm when Bono was 14].”

Bono’s childhood home was bought by Tom and Kathleen Ryan in 1986 from the singer’s father Bob who moved out to Howth. “We did the deal at this table here,” Mr Ryan said. “At the time my family was young, so I wasn’t really into rock’n’ roll so I didn’t know much about U2. I saw a gold disc on the wall and asked him [Bob Hewson] who it was and he said, ‘That’s my son’.

“When I discovered who had been living here, I said to my wife, ‘I want to buy this house’ because I knew U2 were going to be big. The following year they were on the cover of Time magazine as the biggest rock ’n’roll band in the world.”

Bono came back to visit the house in 2004 and film part of the video for Sometimes You Can’t Make It On Your Own in the box room where he dreamed of escape. The song is about his father who had recently passed away.

“When he was here, he apologised about the state of the house [due to the presence of a film crew],” Mr Ryan said.

“I joked with him that he probably increased the value of the house by €1 million, though I wasn’t interested in selling. He asked me to give him first refusal. I’d say he could buy it with the loose change in his back pocket.”